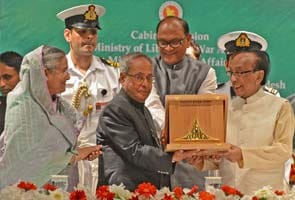 Dhaka: Bangladesh on Monday conferred its second highest award on President Pranab Mukherjee for his valuable contribution to the country's liberation war in 1971.

"Your support towards our War of Liberation in 1971 was for the cause of humanity and justice... your support gave us courage and motivation," President Zillur Rahman said after handing over a crest of 'Bangladesh Muktijuddho Sanmanona' (Liberation War award) to Mr Mukherjee at a ceremony at the Darbar Hall in the Presidential Palace (Bangabhaban) here on Monday evening.

Mr Mukherjee, 77, received the crest amid a standing ovation of more than 200 local and foreign dignitaries including Prime Minister Sheikh Hasina.

The President responded to the honour by saying "I feel humble as I receive this prestigious award and I feel that my contribution was modest".

"As I stand here tonight, I am filled with memories of the events of 1971. I was 36-years-old and an MP when the people of Bangladesh engaged themselves in their liberation struggle," he added.

He recalled that on June 15, 1971 he had the privilege to initiate a discussion at Rajya Sabha when he suggested that India should accord recognition to Bangladesh exile government.

Mr Mukherjee said India has an abiding interest in the all-around development of Bangladesh.

However, the full potential of our cooperation is yet to be tapped, he said.

"Our endeavour will be to see how our bilateral cooperation can bring sustained benefits to our people and improve the quality of their lives. This will be the litmus test of the success of our relationship," he said.

Ms Hasina described Mr Mukherjee as "a real friend" of Bangladesh who "braving all obstacles from different quarters stood beside us when the war was waged at the call of Father of the Nation Bangabandhu Sheikh Mujibur Rahman and played a big role in mobilising support of the international community for our independence."

"As a nation, it's an immense pride for us to have opportunity to confer the 'Bangladesh Muktijuddho Sammanona' on you." she said.

The Bangladesh President said Mr Mukherjee's support for the country's War of Liberation is written "with the golden ink in the country's national history and the nation always recalls the contribution with due gratitude".

"Today's recognition is not for your role in our War of Liberation, rather, it's a symbol of modest gratitude to you on behalf of the entire nation," he said.

Ms Hasina said the Indian government tried its best to free Bangabandhu Sheikh Mujibur Rahman from Pakistani prison and the support of India had accelerated "our stride to achieve
independence."

The Prime Minister hoped that the visit of the Indian President would further strengthen the existing brotherly relations between Bangladesh and India.

Jamaat-e-Islami leaders who had collaborated with Pakistani troops in 1971.

The trial of the Islamists for the crimes they committed during the liberation war of Bangladesh in 1971 triggered a mass uprising against religious fundamentalism.

Mr Mukherjee said it was India's first Prime Minister Jawaharlal Nehru who had stated that "where freedom is menaced or justice threatened or where aggression takes place, we cannot be and shall not be neutral".

Indira Gandhi "without any hesitation translated the vision of Pandit Jawaharlal Nehru into action by extending the support to the people of Bangladesh" during the liberation war in 1971.

Driving home the importance India attaches to Bangladesh, Mukherjee said much like the liberation war in 1971, India today stands beside the people of this country.

Promoted
Listen to the latest songs, only on JioSaavn.com
"We will walk with you as equal partners, should to shoulder, arm in arm. It is no wonder that India and her people share a special connection with Bangladesh", he said.