The government's next big priority after achieving the aim of building 100 million toilets as part of the ''Clean India'' programme is to phase out single use plastic, Prakash Javadekar said. 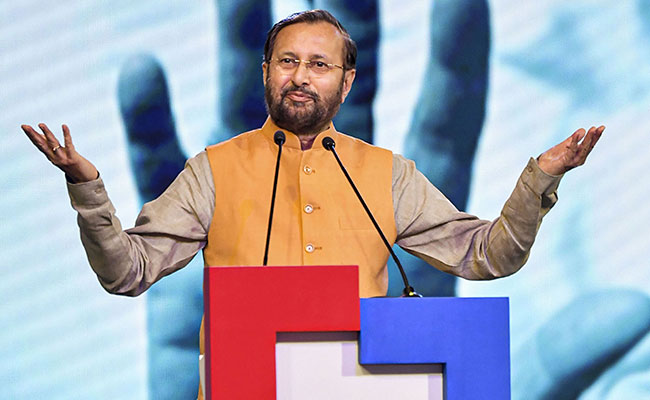 Ridding the country of single use plastic by 2022 will be "Clean India (Swachh Bharat) Part 2", Environment Minister Prakash Javadekar said on Thursday, and added that the government will conduct a mega public outreach programme in the next three years to achieve the target.

The government's next big priority after achieving the aim of building 100 million toilets as part of the ''Clean India'' programme is to phase out single use plastic, the minister said in an interaction with PTI journalists.

In his Independence Day speech, Prime Minister Narendra Modi called for an end to single use plastic to protect the environment. Since then, the Centre as well as various state governments have announced measures to curb its use.

Asked about the confusion on whether October 2 was to be the deadline for doing away with single use plastic, Mr Javadekar said Mahatma Gandhi's 150th birth anniversary was the starting point of a mass movement to achieve the target by 2022.

He said the environment ministry has already directed over 500 national parks, zoos and wildlife sanctuaries across the country to become single use plastic free.

The minister said the government is focussing on instilling behaviourial changes among people to shun plastic and various ministries and government bodies are working towards it. He also referred to the BJP giving out cotton bags with the slogan ''Plastic Nahi, Kapda Sahi''.

Asked if an outright ban on plastic was required for the implementation of the movement, the minister replied in the negative. He said the government had in 2016 banned plastic carry bags below 50 microns.

"We were importing plastic waste in large quantities and have enough of it which is a problem. We have stopped that and banned that. We have already banned plastic carry bags below 50 microns under Plastic Waste Management Rules 2016," he said.

He said the government is very serious about the issue of plastic and that is why PM Modi made a passionate appeal.

"For the last two months he is creating public opinion... and launching a public campaign that people should say no to single use plastic at least to begin with," the minister said.

Asked about the response of the corporates, including manufacturers of plastics, Mr Javadekar said their response has been impressive and they are coming forward with alternatives.

"Industries have started thinking of alternatives and now it will happen faster because people want biodegradable stuff... We are essentially improving solid waste and plastic waste management," he added.

According to Mr Javadekar, plastic waste is growing in rural areas and there are no rules applicable to gram panchayats.

"That is where public campaign comes into play," he said.

The minister said states have their own laws regarding waste management.

"We have a federal structure so many states have enacted their own laws regarding waste management. There are many restrictions put out on plastic use and manufacturing. But every state has a different regime," he said.

In guidelines issued to states and Union territories earlier, the environment secretary said all government offices must completely ban all types of plastic carry bags, thermocol disposable cutlery and discourage the use of artificial banners, flags, flowers, water bottles, plastic folders and the like.

"India is a vast country with 1.3 billion people so behaviour change will take time. In earlier regimes, toilets used to be built, but not in this quantity and people were not using it. This time public campaign was launched on the use of it. That is behaviourial change," he said.

Other ministries have also taken the lead in eliminating plastic, Mr Javadekar said, citing the example of the Railways that has banned plastic cups for tea.

"Every ministry has taken action... It is a people's movement and simultaneously producers of plastic can also think of alternatives and we are improving the plastic waste management system. All strategies working together will make India plastic waste free country," he said.