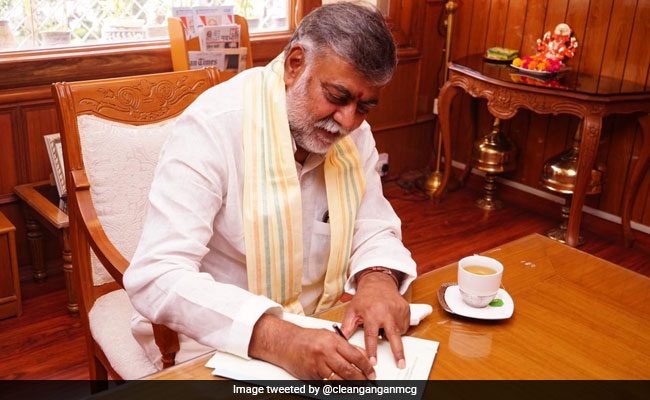 Prahlad Patel and Bishweswar Tudu were greeted by Gajendra Singh Shekhawat after they assumed charge.

Prahlad Singh Patel and Bishweswar Tudu took charge as Ministers of State in the Jal Shakti Ministry on Thursday. The two MoS were greeted by Union Jal Shakti Minister Gajendra Singh Shekhawat after they assumed their charge.

Besides the Jal Shakti ministry, Mr Tudu, a first-time MP from Odisha, is also the MoS in the Tribal Affairs ministry. Mr Patel is also an MoS in the Ministry of Food Processing Industries.

Later, Mr Patel thanked Mr Shekhawat on Twitter and said he got an opportunity to fulfill Prime Minister Narendra Modi's vision and mission of "swachhata" (cleanliness) and providing "Har Ghar Jal" along with the Union Minister of Jal Shakti.

I feel extremely happy to take over the charge of MOS in the ministry of Tribal affairs. I will be glad to work with Hon'ble Union minister Shri Arjun Munda ji for discharging the duty.@PMOIndia@MundaArjun@JPNadda@blsanthosh@renukasinghbjppic.twitter.com/B3Bkdm89Jc

In a major Union Cabinet makeover, Prime Minister Narendra Modi on Wednesday dropped 12 ministers and brought 36 new members to his government. Apart from 15 Cabinet ministers, 28 Ministers of State, comprising new faces and those elevated, were sworn in a ceremony which was held in the Darbar Hall of the Rashtrapati Bhavan.