Khurai returning officer Vikas Singh was removed from his post. Another officer Tanvi Hooda instead was put in charge of the seat, an order by the polling body said. 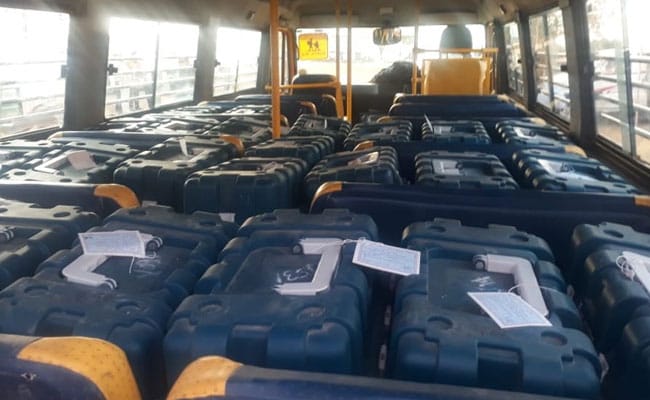 A controversy has broken out in Madhya Pradesh over the delay in EVMs reaching the collection centre.

The Election Commission on Wednesday ordered the removal of returning officer of the Khurai assembly seat in Madhya Pradesh after some electronic voting machines and paper trail machines reached the strong room 48 hours after the elections were held. These machines were meant as reserves and were not used in polling.

Khurai returning officer Vikas Singh was removed from his post. Another officer Tanvi Hooda instead was put in charge of the seat, an order by the polling body said.

Two petitions were filed in the Madhya Pradesh High Court on Tuesday in connection with the EVMs used in the polls on November 28.

Congress leader Naresh Saraf sought direction from the high court to set up a special investigation team (SIT) to probe the alleged irregularities in the handling of the reserve EVMs in Bhopal, Satna, Sagar, Shahjapur and Khandwa.

Senior Congress leaders Ahmed Patel, Kamal Nath and Kapil Sibal had also met Election Commission officials on Tuesday and raised a number of issues, ranging from EVM-related complaints in Madhya Pradesh and Amit Shah's statement to the arrest of the opposition party's working president in Telangana.

Earlier on Tuesday, Madhya Pradesh Congress chief Kamal Nath had also met the Chief Election Officer in New Delhi and demanded that EVMs be protected in a secured place and that counting be done in an impartial and fair manner.

Counting of the Madhya Pradesh assembly polls will be held on December 11.