Policy paralysis ahead of elections is also a threat investors will have to factor in. That together with a record low rupee and rising local interest rates could hurt consumption and throttle the recovery.

Economists forecast growth at 7.4 percent, 7.1 percent and 7 percent in the last 3 quarters of the year

India's world-beating economic growth is running up against some big risks: high oil prices, emerging market stress as the era of easy money draws to a close, and policy paralysis in the run-up to next year's federal election.

Those factors may push the rupee, Asia's worst performer this year, even lower, as well as dampen some of the optimism that has propelled the local stock market to record highs. They also serve as a reminder to investors that Asia's third-largest economy, which has overcome the twin shocks of a cash ban and the chaotic introduction of a nationwide consumption tax, is not fully out of the woods yet.

Policy paralysis ahead of elections is also a threat investors will have to factor in. That together with a record low rupee and rising local interest rates could hurt consumption and throttle the recovery. Exports are separately at risk from the global trade war.

"The outlook for the remainder of the year is not as optimistic," said Priyanka Kishore, head of India and South East Asia Economics at Oxford Economics Ltd. in Singapore. "Reform momentum is likely to slow ahead of the 2019 general election, as the government shifts focus to capturing votes."

Data on Friday showed gross domestic product grew 8.2 percent in the three months ended June from a year ago, the fastest in nine quarters, while beating the 7.6 percent median estimate in a Bloomberg survey. For now, that number cements India's position as the world's fastest-growing major economy, putting it ahead of China, where an intensifying trade conflict with the U.S. is dimming the growth outlook. 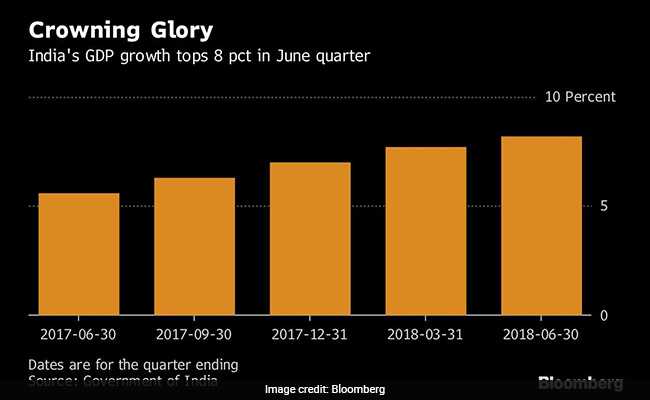 While India's share in world trade is relatively small, it isn't entirely immune from global spats. Case in point: the oil price gain following proposed American sanctions on Iranian crude. Every $10 increase pushes up the inflation rate by 30 to 40 basis points and hurts economic growth of the world's fastest growing oil user by about 15 basis points, according to Nomura Holdings Inc.

Add a weaker currency to this equation, and the problem gets compounded. Every rupee change in the exchange rate against the U.S. dollar impacts New Delhi's crude oil import bill by about 109 billion rupees ($1.5 billion) on an annualized basis, according to the oil ministry's Petroleum Planning and Analysis Cell. The rupee gained 0.3 percent to 70.8025 per dollar in early trading on Monday after growth beat estimates. Stocks opened Monday with gains -- the S&P BSE Sensex was up 0.3 percent as of 9:18 a.m.

A few indicators compiled by analysts at Nomura Holdings Inc. already point to some slowing. That is "consistent with our view that growth is set to slow cyclically due to tighter financial conditions, high oil prices, slowing global growth and a pullback in investment spending ahead of elections," analysts led by India economist Sonal Varma wrote in a report last week.

The median of a Bloomberg survey released last week shows that economists expect the economy to slow from here on. Economists forecast growth at 7.4 percent, 7.1 percent and 7 percent in the remainder three quarters of the financial year through March 2019, respectively.

That will put average growth a notch below the Reserve Bank of India's forecasts of 7.4 percent. The RBI appears confident that the domestic recovery is well entrenched with various indicators suggesting that economic activity has continued to be strong. It raised interest rates twice this year in a bid to curb inflation.

It's not all gloomy though. In a sure sign that demand was holding up, companies have passed on higher input costs to consumers, amid a revival in investment activity and improving capacity utilization. 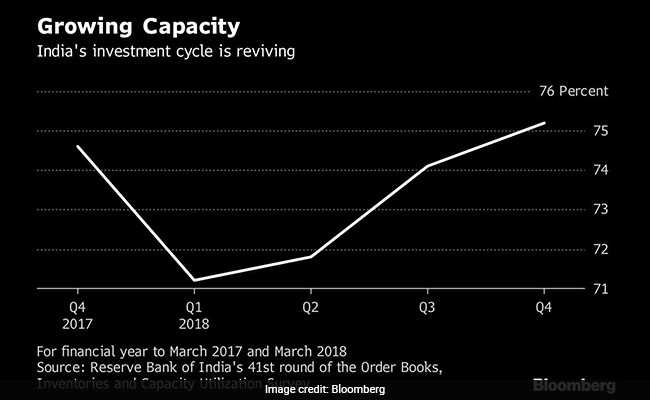 Pranjul Bhandari, chief India economist at HSBC Holdings Plc, says as the twin shocks of the cash ban and consumption tax fade, demand and production have picked up, even leading to some "overshooting" in growth.

HSBC estimated growth during January to June will average 7.8 percent, and will return to its trend of 7.1 percent by December as the base normalizes and inventories are re-stocked, she said.

"We believe that the government's continued focus on unlocking supply bottlenecks, reviving stalled investment projects and stepped up emphasis on public infrastructure projects is driving investment momentum," Sanyal said, pointing to higher steel and cement production during the first half of 2018.