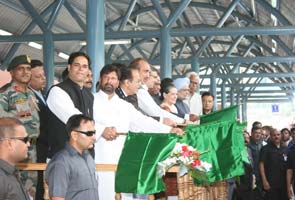 Dr Singh and Mrs Gandhi flagged-off the first train on the 18-km-long section.

The train will pass through an 11-km-long tunnel in this stretch which will reduce the distance of 35 kilometre between Banihal and Qazigund to just 18 kilometre. The tunnel is Asia's second longest after China's Wushaoling.

The tunnel link will also provide an alternative link to the existing Jawahar Tunnel and willeventually make the Valley accessible by train through the Jammu-Udhampur-Srinagar-Baramulla railway route. An eight-coach train will start regular operations from Banihal to Baramulla from June 27.

Promoted
Listen to the latest songs, only on JioSaavn.com
The tunnel has been constructed at an estimated cost of Rs 1,300 crore and taken almost seven years to complete. 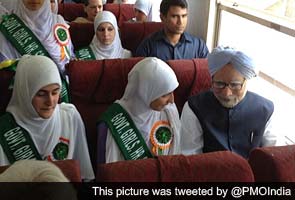 "This tunnel has been constructed according to new Australian tunneling method. It has all the facilities, like safety precaution, ventilation, CCTVs and fire alerts. It has all facilities to tackle any untoward incident," said Sharnappa Yalal, Project Manager.

Trial run on Banihal-Qazigund section was successfully done on December 28 last year and since then trains carrying stones are running on regular basis.
Comments
Kashmir valley