The singer told news agency ANI that she decided to meet PM Modi after her latest song "Rona Sherma" - dedicated to the prime minister - became a hit. 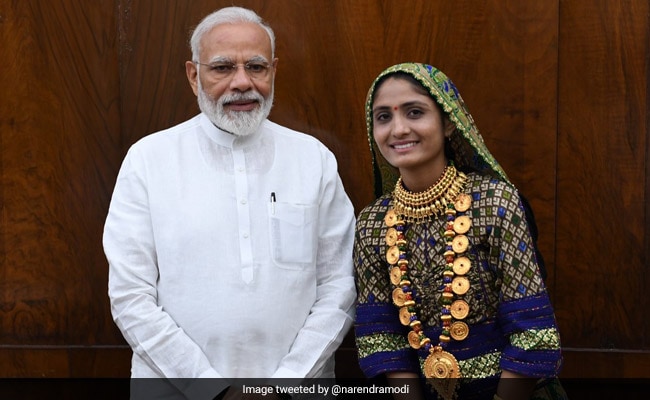 PM Modi said in a tweet he was impressed by Geeta Rabari's efforts to popularise folk music.

A Gujarati folk singer who dedicated a song to Prime Minister Narendra Modi met him on Monday after it became a hit. PM Modi said in a tweet later that he was impressed by her efforts to popularise folk music.

"People like Geeta Rabari inspire our society. Belonging to a humble background, she dedicatedly pursued her passion of singing and excelled. I am deeply impressed by her efforts to popularise Gujarati folk music among youngsters," PM Modi tweeted, wishing her the best for her future endeavours.

The singer told news agency ANI that she decided to meet PM Modi after her latest song "Rona Sherma" - dedicated to the Prime Minister - became a hit.

Geeta Rabari also said that she had met PM Modi when she was a child.

"Back then I sang in my school and he (Narendra Modi) was there. He gave me Rs 250 as prize and told me that my voice is good and that I should practice and keep singing," she said.

"Now that my Gujarati song has became a hit so I came to seek his blessings," she added.

Geeta Rabari said PM Modi was "like her father".

The singer also said it was this government's "Beti Bachao, Beti Padhao" scheme that made her education possible. '

"I belong to the Maldhari community and we used to live in the jungles. My father got a postcard with the Beti Bachao Beti Padhao message on it. Because of this scheme, my father encouraged me to study," she said.