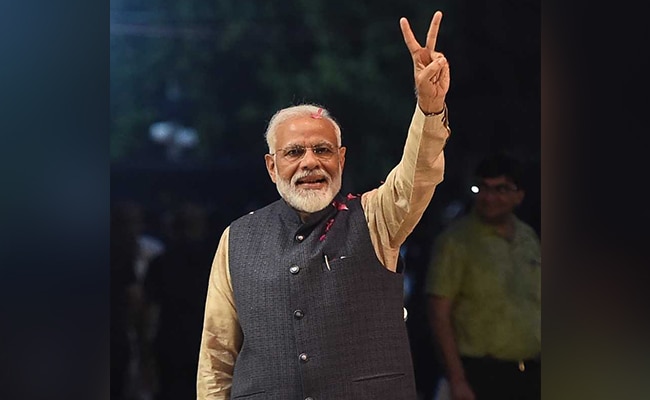 Narendra Modi's oath ceremony will take place at 7 PM in Rashtrapati Bhavan in Delhi. You can watch the swearing-in ceremony LIVE on your TV, computers, mobile phones through various NDTV channels. The ceremony will be attended by leaders of the BIMSTEC member countries - Bangladesh, India, Myanmar, Sri Lanka, Thailand, Nepal and Bhutan in line with the government's "Neighbourhood First" policy. Nearly 8,000 guests will attend the oath ceremony of today, making it the biggest-ever event held in the historic place.

You can also check the oath ceremony of Narendra Modi on NDTV app on all mobile platforms including Android and iOS. The NDTV app now has two versions. The first one is the regular NDTV app and the other version is the newly-launched NDTV Lite app. If you are on a low-end phone and wish to save data, you can use NDTV Lite to track the Narendra Modi swearing-in ceremony.

You can follow NDTV on Twitter on our official handle, @ndtv for all updates on Modi oath ceremony. You can also use the hashtag #ModiSwearingIn to track real-time updates.

Follow this blog for all LIVE updates on Modi swearing-in ceremony at Rashtrapati Bhavan.

Narendra Modi is the first BJP leader who has been elected for a second term after completion of his five-year tenure, a feat so far achieved only by three Congress leaders -- Jawaharlal Nehru, Indira Gandhi and Manmohan Singh. The BJP-led National Democratic Alliance had won a resounding majority in the Lok Sabha elections, winning 352 seats in the 545-member lower house of parliament.