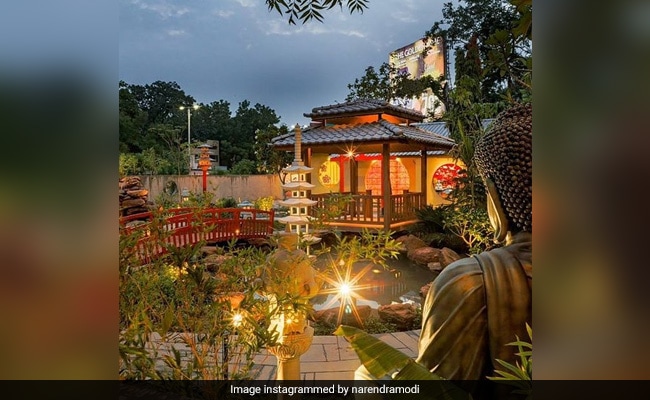 Prime Minister Narendra Modi on Monday shared stunning images of a Japanese-style Zen Garden in Ahmedabad that he inaugurated virtually on Sunday.

The snapshots shared by PM Modi on Twitter and Instagram showed a brightly-lit garden with a statue of Lord Buddha and a tiny waterfall. The garden and a meditation centre have been set up at the Ahmedabad Management Association (AMA).

Besides the Zen Garden, PM Modi also virtually inaugurated a Kaizen Academy on the AMA premises.

In his address through video conference, he said that the opening of the Zen Garden and the Kaizen Academy "is a symbol of the spontaneity and modernity of relations" between India and Japan.

"Indians will find the glimpse of the same peace, poise, and simplicity, in this Zen Garden, which they experienced in Yoga through the ages. Buddha gave this 'dhyan', this enlightenment, to the world," said the Prime Minister.

Zen is defined as a school of Mahayana Buddhism and it lies at the core of Japanese culture.

Satoshi Suzuki, the Ambassador of Japan to India, who attended the inaugural ceremony of the Zen Garden and Kaizen Academy Hall, tweeted, "I hope the Garden will become a symbol of friendship between Gujarat and Hyogo to further develop the #JapanIndia relations."

Delighted to attend the inaugural ceremony of the Japanese Zen Garden and Kaizen Academy Hall at AMA in Ahmedabad. I hope the Garden will become a symbol of friendship between Gujarat and Hyogo to further develop the #JapanIndia relations. https://t.co/YRlX3f2OYApic.twitter.com/r4zPJIMvWv

The photos were retweeted by BJP leaders in Gujarat.

PM Modi said India and Japan were devoted to external progress and prosperity as much as internal peace and progress.