Speaking at the informal BRICS leaders' meeting in Osaka, PM Modi said that there was an immediate need to strengthen the WTO, fighting protectionism, ensuring energy security and work together to fight terrorism. 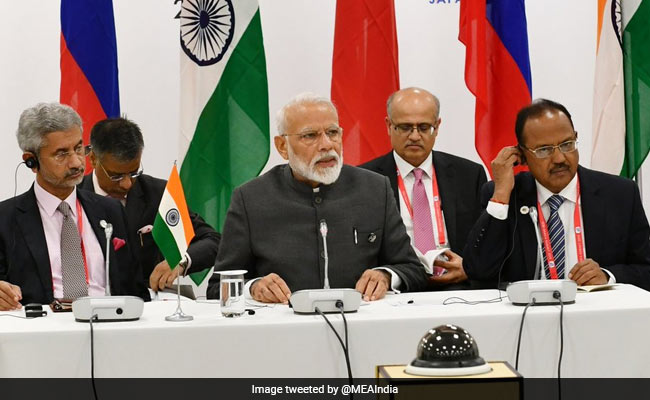 Prime Minister Narendra Modi on Friday put forward a five-point approach to address common challenges facing the world, including protectionism, unilateralism at global financial organisations like the WTO, and terrorism.

Speaking at the informal BRICS leaders' meeting in Osaka, PM Modi said that there was an immediate need to strengthen the WTO, fighting protectionism, ensuring energy security and work together to fight terrorism.

In his address, PM @narendramodi presented a 5-point approach for #BRICS to address global challenges. pic.twitter.com/YmNNF9GKBw

"On the other hand, the lack of resources is reflected in the fact that there is a shortage of an estimated USD 1.3 trillion in investment for emerging market economies," he said.

He said making development and progress inclusive and sustainable is the second major challenge.

"Rapidly changing technologies such as digitisation and climate change are concerns not just for us, but also for the future generations. Development is in the right direction when it reduces inequality and contributes to empowerment," the prime minister said.

Terror is the biggest threat to all humanity, he said.

"It not only takes the lives of innocent people, but also has a negative effect on economic progress and social stability," PM Modi said.

"There is a need to stop all the mediums of support to terrorism and racism," PM Modi said.

Talking about his five-point approach to tackle these challenges, PM Modi said the ill effects of unilateral decisions can be addressed to an extent by the coordination between the BRICS countries.

"We need to emphasise on the necessary reforms in international financial and business institutions and organisations for improving multilateralism," he said.

Energy resources like oil and gas should be available at low prices regularly for continuous economic development, the prime minister said.

For sustainable and inclusive development, the New Development Bank should give priority to the investment in the physical and social infrastructure and renewable energy programmes of member countries.

India's initiative for Coalition for Disaster Resilient Infrastructure will help in the development of appropriate infrastructure in developed and developing countries to face natural calamities, PM Modi said.

"I invite you to join this coalition," he added.

"The movement of skilled workers around the world should be made easy. This will also benefit the countries where a large part of the population has crossed the working age," PM Modi said.

For fighting terrorism, the prime minister called for organising a global conference on terrorism.

"I have recently called for organising a Global Conference on Terrorism. Lack of necessary consent to fight against terrorism can not keep us inactive," he said.