"Nothing is more important to us than the defence of the country," Prime Minister Narendra Modi said 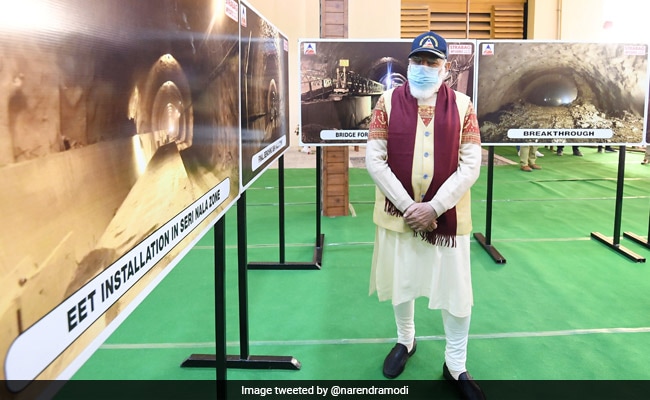 The 9.02 km Atal Tunnel reduces the Manali-Leh distance by 46 km or by five hours.

Prime Minister Narendra Modi on Saturday said Congress governments had compromised the country's defence interests for a long time by “playing around with files” and delaying procurement of fighter jets, arms, ammunition, and strategic equipment.

Addressing public meetings in Himachal Pradesh after inaugurating the strategically-important Atal Tunnel, the Prime Minister also took a swipe at the opposition's protest against farm and labour law reforms. He said those parties had similar ideas but lacked the courage to implement them as they focused on elections, while his government looked at the country's and farmers' welfare.

“Nothing is more important to us than the defence of the country. But for a long time, the country has also witnessed an era when the defence interests of the country were compromised. The air force of the country kept demanding a modern fighter plane, while they kept opening and closing files after files, and kept playing around with those files,” PM Modi said at Rohtang after inaugurating the tunnel.

The 9.02 km Atal Tunnel reduces the distance between Manali and Leh by 46 km and the travel time by up to five hours. It has been billed as the world's longest highway tunnel, built at a cost of over Rs 3,000 crore.

PM Modi's comments on the Congress-led United Progressive Alliance (UPA) government assume significance in the wake of the government's repeated assertion that the administration had delayed decisions on the acquisition of Rafale fighter jets from France.

“Be it ammunition, modern rifles, bulletproof jackets, equipment that are used in cold weather conditions, everything was kept in abeyance,” he said, wondering about the “compulsion” and “pressure” behind such delays.

His government, the prime minister said, has deployed all its strength to develop border infrastructure, adding that never before has work been done at such a big scale, be it building roads, bridges, or tunnels.

PM Modi said that such border connectivity will aid the security forces.

India and China are locked in a five-month-long bitter border standoff in eastern Ladakh. Both sides have held a series of diplomatic and military talks to resolve the row without any breakthrough.