"Apologising To Nation...": PM Says 3 Farm Laws To Be Cancelled

Prime Minister Narendra Modi defended the laws saying they were meant as reforms, mainly for small and marginal farmers in the country.

Three controversial farm laws at the heart of massive farmer protests across the country for over a year will be withdrawn, Prime Minister Narendra Modi said on Friday in a stunning announcement just months before elections in states like Uttar Pradesh and Punjab.

The move comes on the festival of Guru Purab, when Sikhism founder Guru Nanak's birthday is celebrated, mainly in Punjab.

"While apologising to the nation, I want to say with a sincere and pure heart that maybe something was lacking in our tapasya (dedication) that we could not explain the truth, as clear as the light of the diya, to some of our farmer brothers. But today is Prakash Parv, not the time to blame anyone. Today, I want to tell the country that we have decided to repeal the three farm laws," PM Modi said in an address to the nation.

"In the Parliament session starting the end of this month, we will complete the process of repealing the three laws," he said.

"I would request all my protesting farmer friends, today is the auspicious day of Guru Purab, return home to your fields and your families and make a new beginning, let us move forward afresh." 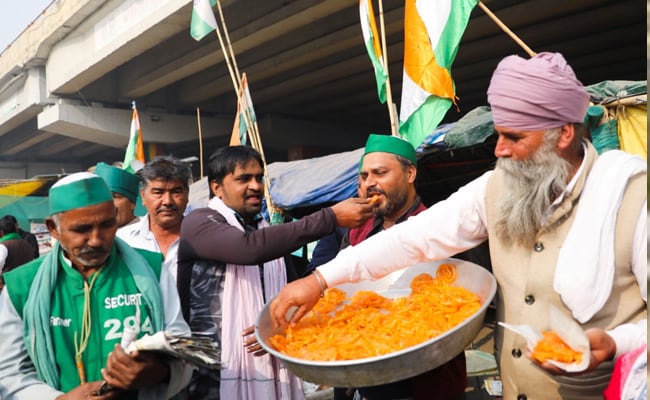 Farmers feed each other sweets and celebrate after PM Modi announced that he will repeal the controversial farm laws.

Before the big climb-down, the Prime Minister defended the laws saying they were meant as reforms, mainly for small and marginal farmers in the country.

"Whatever I did was for farmers. What I am doing is for the country."

Thousands of farmers from Punjab, Haryana, Uttar Pradesh and Rajasthan have been camping outside Delhi since November 2020, demanding that the "black laws" be withdrawn. The BJP has faced massive anger in northern states, something it cannot afford as it preps for big elections ahead, including the 2024 national polls.

Rakesh Tikait, a top farmer leader, said the protesters would wait till the laws were repealed in the session starting on November 29.

The farmer protests did not stop through several rounds of talks between the government and farmers, disruptions in parliament and Supreme Court hearings on petitions challenging the laws.

"We regret we could not convince all farmers. Only a section of them was opposing the laws, but we kept trying to educate and inform them," PM Modi said.

Soon after his speech, #Masterstroke started trending on social media.

The opposition has to recalibrate its next moves but for now, its leaders call it the farmers' victory over the government's arrogance.

The opposition and farmers accuse the government of railroading the three laws through parliament without much discussion. The government said the laws would remove middlemen and improve farmers' earnings by allowing them to sell anywhere in the country. Farmers argued that the laws would expose them to unfair competition, leave them at the mercy of corporates and deprive them of the guaranteed price for their produce.

The sensational rollback is politically expedient for the BJP as it seeks re-election in Uttar Pradesh, a big decider ahead of 2024.

The BJP feared that it would lose voters in western Uttar Pradesh, one of the epicentres of the farmer protests, a region that has a fourth of the assembly seats set to vote.

The frequency of visits to UP by the Prime Minister and other leaders like Amit Shah reflect the party's laser focus on retaining UP.

Right after his address, PM Modi headed to Uttar Pradesh again to launch a series of schemes.

The PM's move may tip the balance in Punjab, where the BJP has been reduced to a minor player after long-time ally Akali Dal broke ties over the farm laws. The state's ruling Congress faces a challenge from its own former leader, Amarinder Singh. Amarinder Singh, forced to quit as Chief Minister in September, held talks with the BJP soon after. Cancelling the farm laws was reportedly a condition that Mr Singh had for a tie-up with the BJP.