Chief Minister Yogi Adityanath has conducted an all-out campaign in Kairana, pressing into action not only his deputy Mr Maurya, but also at least five state ministers. 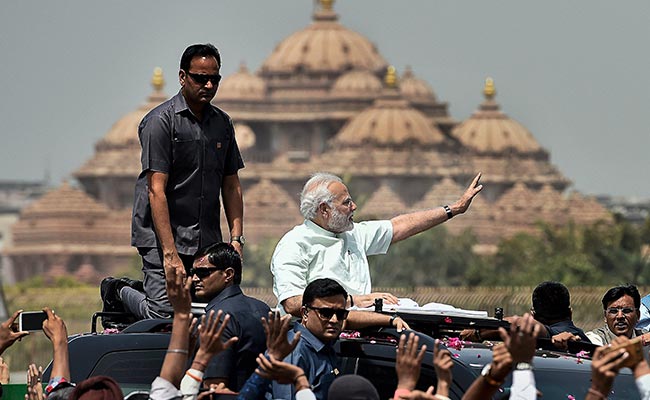 Prime Minister Modi was in Baghpat today to inaugurate the Eastern Peripheral Expressway.

New Delhi: A day before the crucial by-election in Uttar Pradesh's Kairana, Prime Minister Narendra Modi's inauguration of Eastern Peripheral Expressway in next-door Baghpat ran into controversy. Many questioned the timing of the inauguration, with his address touching upon the key matters affecting the area. One of these was sugarcane dues -- which became a hot button issue after a protesting farmer died yesterday in Baghpat.

The Prime Minister's meeting became a matter of contention soon after it was announced. While Chief Minister Yogi Adityanath ran an all-out campaign in Kairana, involving a dozen of his ministers, PM Modi's presence in Baghpat was seen a crucial factor. Anticipating an indirect campaign speech, the opposition complained to the Election Commission about a possible violation of the model code of conduct, but it was turned down.

His comments triggered a scathing tweet from Congress chief Rahul Gandhi. The tweet in Hindi, said, "Sugarcane farmers of UP must be wondering when the PM comes to take credit for UPA schemes, tearing through their farms, why doesn't he think of them. Unfortunately, farmers like Udayveer, who gave their life fighting for their right, can't even do that."

58-year-old Udayveer Singh had been sitting on a week-long protest over non-payment of cane dues by sugar mills, when he died yesterday. It is suspected that he suffered a cardiac arrest.

The Prime Minister also praised the leadership of Chief Minister Yogi Adityanath - saying law and order in the state has improved and criminals are now surrendering on their own. He launched a scathing attack on the opposition Congress for spreading "lies and rumours" on matters ranging from dilution of anti-Dalit atrocities law to farmer issues, saying "People used to worshipping one family cannot worship democracy".

The by-election in Kairana is an acid test for the united opposition, which has up a candidate against BJP's Mriganka Singh, daughter of legislator Hukum Singh who died in February. Tabassum Hassan is the candidate of Ajit Singh's Rashtriya Lok Dal, a party that had a huge support base among Jats, till they decided to shift allegiance to the BJP. The RLD candidate is also supported by the Congress and Akhilesh Yadav's Samajwadi Party. The support of Mayawati's Bahujan Samaj Party, which has an alliance with Akhilesh Yadav, is there, although it has not been made official.

Promoted
Listen to the latest songs, only on JioSaavn.com
Alliance between traditional rivals SP and BSP recently lost the BJP by-elections in two key constituencies - Gorakhpur and Phulpur -- one represented by Chief Minister Yogi Adityanath and the other by his deputy Keshav Pradhan Maurya. It is now expected to deliver Dalit and Muslim votes to the RLD candidate, who hopes to have the support of a section of Jats too.

Last week, at the oath of HD Kumaraswamy in Karnataka, leaders of 23 opposition parties gathered in a show of strength, carrying hopes of forging an anti-BJP front ahead of next year's assembly elections.