In the UAE, PM Narendra Modi will convey his personal condolences on the passing away of Sheikh Khalifa bin Zayed Al Nahyan, the former UAE President and Abu Dhabi ruler. 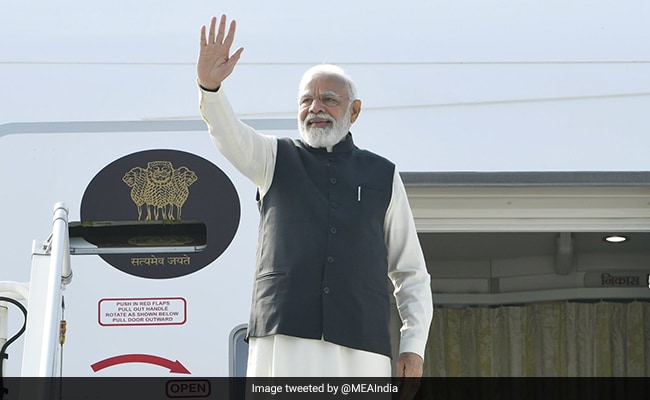 Prime Minister Narendra Modi today left for the UAE after attending a productive G7 Summit in Germany and interacting with several world leaders during which they discussed many issues aimed at furthering global well-being and prosperity.

"PM @narendramodi concludes his visit to Germany for the G7 Summit, wrapping up two days of productive discussions on sustainable solutions to global challenges, PM Modi now emplanes for Abu Dhabi for a brief stopover before reaching New Delhi," the Ministry of External Affairs tweeted.

In the UAE, he will convey his personal condolences on the passing away of Sheikh Khalifa bin Zayed Al Nahyan, the former UAE President and Abu Dhabi ruler.

PM Modi had expressed grief over his death, calling him a great statesman and visionary leader under whom India-UAE relations prospered.

"Leaving Germany after a productive visit in which I attended the @G7 Summit, interacted with several world leaders and participated in a memorable community programme in Munich. We were able to discuss many issues aimed at furthering global well-being and prosperity," PM Modi tweeted.

"I thank the people of Germany, @Bundeskanzler Scholz and the German Government for their hospitality during the entire visit. I am confident India-Germany friendship will scale newer heights in the times to come," the Prime Minister wrote.

During his two-day visit to Germany, PM Modi met his counterparts from the UK, Japan and Italy and exchanged views on a range of issues with them.

During his meeting with German Chancellor Olaf Scholz, the two leaders agreed to take forward the momentum in the India-Germany Strategic Partnership besides further diversifying the bilateral cooperation on climate-related issues for the benefit of their people and the entire planet.

PM Modi and French President Emmanuel Macron discussed a range of bilateral and global issues over a cup of tea.

On Sunday, PM Modi addressed the Indian community during a massive community event at the Audi Dome indoor arena in Munich.