The Prime Minister's aircraft landed at Entebbe International Airport, marking the start of his two-day Uganda visit - the first bilateral tour by an Indian prime minister since 1997. 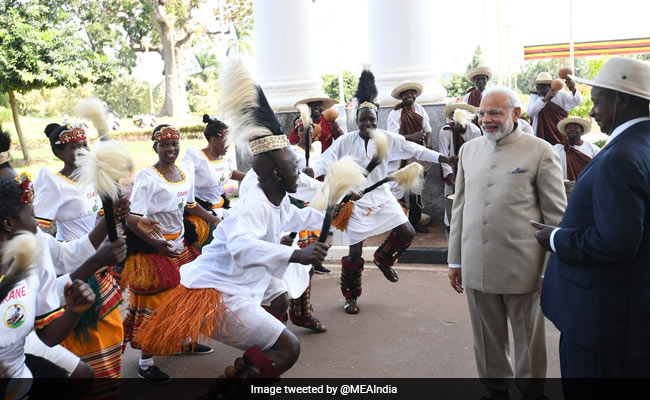 Prime Minister Modi was accorded a ceremonial welcome in Uganda

Prime Minister Narendra Modi is in Uganda today as part of his five-day, three-nation tour to African countries.

The Prime Minister's aircraft landed at Entebbe International Airport, marking the start of his two-day Uganda visit - the first bilateral tour by an Indian prime minister since 1997.

He was accorded a red carpet welcome at the airport. His programme in Uganda include, a call on President Yoweri Museveni, restricted and delegation-level talks, and participation at a India-Uganda joint business event.

From Uganda, PM Modi will head to South Africa to participate in the BRICS Summit, whose theme this year is 'BRICS in Africa'.

Here are the highlights of PM Modi's Africa visit:

Jul 25, 2018 15:47 (IST)
PM Modi had made the following points on the Parliament of Uganda :
Our partnership will build instruments of empowerment in Africa.
Just as India and Africa fought colonialism together, we will work together for a just, representative and democratic global order that has a voice and a role for one-third of humanity that lives in Africa and India
We will keep our markets open and make it easier and more
attractive to trade with India.
Our development partnership will be guided by your priorities. It will be on terms that will be comfortable for you, that will liberate your potential and not constrain your future.
Africa has 60% of the world's arable land, but produces just 10% of the global output. We will work with you to improve Africa's agriculture.
Jul 25, 2018 14:26 (IST)

India Willing To Address Trade Deficit With Uganda: PM Modi
Prime Minister Narendra Modi on Wednesday said that his country is willing to address the current trade imbalance with Uganda."
Jul 25, 2018 14:07 (IST)
We fought together to make development the foundation of globlal trade. Our doctors and teachers went to Africa not just to seek professional opportunities but in solidarity to a common cause of development.
Jul 25, 2018 14:06 (IST)
India pursued Afro-Asian solidarity in Bandung (in Indonesia).
Gandhiji's peaceful relations inspired Nelson Mandela, Desmond Tutu and many other leaders.
Some of the most profound changes to Africa came through Gandhian philosophy.
Jul 25, 2018 14:04 (IST)
At the sacred site in Jinja, where a statue of Gandhiji now stands, we will build a Gandhi Heritage Centre.

As we approach the 150th birth anniversary of Mahatma Gandhi, there can be no better homage than a Centre to remind us of Africa's role in shaping his mission, says PM Modi.
Jul 25, 2018 14:04 (IST)
Uganda is the pearl of Africa. It is a land of great wealth of resources and rich heritage: PM Narendra Modi at Ugandan Parliament
Jul 25, 2018 14:03 (IST)
Mr President, your visionary leadership has enabled Ugandans of Indian origin to return to their home, regain their lives and help rebuild the nation that they love.

In opening the State House to celebration of Deepawali, you have lit up the many strands of ties that bind us, said PM Modi
Jul 25, 2018 14:02 (IST)
Our ancient maritime links, the dark age of colonialism, the shared struggle for freedom, the uncertain paths as independent countries in a divided world, the dawn of the new opportunities and the unity of aspirations of our young population, all of this connect us: PM
Jul 25, 2018 14:01 (IST)
I am conscious of the history that brings us to this point,  when the Prime Minister of the largest democracy  is speaking to elected members of the Parliament  of another sovereign nation, said PM Modi.
Jul 25, 2018 13:59 (IST)

PM @narendramodi address at the Ugandan Parliament: I am deeply honoured by the invitation to address this august House. This honour has come to a Prime Minister of India for the first time. It is a great honour for the one point two five billion people of India. pic.twitter.com/loz58cNnvt

Jul 25, 2018 13:59 (IST)
The PM of the largest democracy is speaking to elected parliament of another sovereign nation, says PM Modi in Uganda parliament.
Jul 25, 2018 13:56 (IST)
PM Modi is about to speak at the Uganda parliament, first-ever address by an Indian PM
The stage is all set for the first-ever address by an Indian Prime Minister at the Parliament of Uganda. PM @narendramodi, Ugandan President Museveni, Speaker of the Parliament and Members of Parliament seated in the House.

The stage is all set for the first-ever address by an Indian Prime Minister at the Parliament of Uganda. PM @narendramodi, Ugandan President Museveni, Speaker of the Parliament and Members of Parliament seated in the House. pic.twitter.com/lSB5LOv2CY

PM @narendramodi : India is ready to work with Uganda in the fields of capacity building, HRD, skill development, innovation and also in adding value to the abundant natural resources available in this country. pic.twitter.com/rot1ufVdGw

PM @narendramodi : India is willing to take steps to address the trade deficit between India and Uganda. pic.twitter.com/7D40V02U9C

Ugandan President Museveni speaking at the India Uganda Business Forum. He exhorted the business community from both countries to tap the opportunities available for enhancing trade and investment. pic.twitter.com/6dseuz7TKM

Glimpses from the ceremonial welcome at @StateHouseUg in Entebbe. pic.twitter.com/8T1zJlgg3A

The focus of the talks with President @KagutaMuseveni included sectors such as defence, innovation, investment and tourism. Together, India and Uganda can make a meaningful contribution to humanity. pic.twitter.com/SB2odh9AKY

Jul 24, 2018 19:03 (IST)
Prime Minister Modi in his statement to the press in Uganda has said that, he thanks the President of Uganda for a warm welcome.

He said that Uganda always has been close to our hearts and will continue to stay so.  He added that that cooperation between the two countries is growing and even in security matters our cooperation is progressing
Jul 24, 2018 18:56 (IST)
Prime Minister Modi addresses the press in Uganda.

Jul 24, 2018 17:33 (IST)
Prime Minister Modi while addressing the India Rwanda Business Forum interacted with the business community from both countries.

We want to boost economic ties between India and Rwanda. Our nations can do a lot together. There are several opportunities in rural development and small scale industries: PM Modi in Kigali #Rwandapic.twitter.com/CsHJ3JODsV 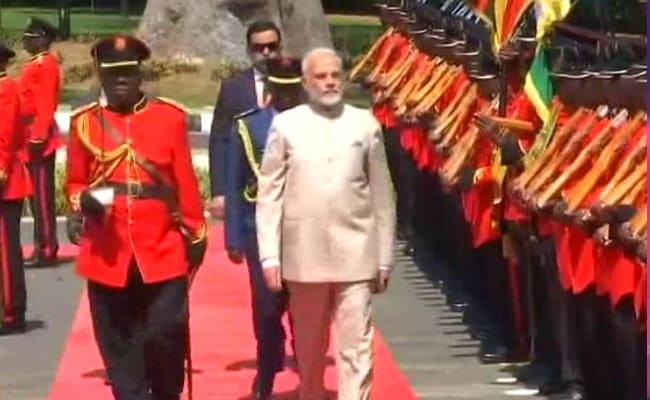 After an action-packed visit lasting less than 24 hours, PM @narendramodi emplanes for the second leg of his three nation tour. Seen off by Rwandan President @PaulKagame. Next destination - #Kampala, Uganda! pic.twitter.com/MGSPKYyM0O

Jul 24, 2018 16:57 (IST)
Prime Minister Modi has arrived in Uganda and is expected to meet the President of Uganda Yoweri Museveni.

Jul 24, 2018 12:54 (IST)
Prime Minister Narendra Modi today visited the Genocide Memorial Centre here which honours over 250,000 victims of Rwanda's mass killings in 1994, according to a Press Trust of India report.

The memorial is the final resting place for more than 250,000 victims of the genocide against the Tutsi -- the principal ethnic community in Rwanda, the PTI report says.

It includes three permanent exhibitions, the largest of which documents the 1994 genocide.

There is also a children's memorial and an exhibition on the history of genocidal violence around the world. The education centre, gardens, and Genocide Archive of Rwanda contribute to a meaningful tribute to those who perished, and provide a powerful educational experience for visitors, according to the memorial's website.
Jul 24, 2018 12:42 (IST)

Beginning the day on a poignant note! PM @narendramodi visits the Genocide Memorial Centre in #Kigali. The Memorial honours the victims of the worst excesses of violence. It is also symbolic of the admirable and exemplary process of reconciliation Rwanda has embarked upon. pic.twitter.com/Hsd9uax259 "The memorial honours the victims of the worst excesses of violence. It is also symbolic of the admirable and exemplary process of reconciliation Rwanda has embarked upon," he said in his tweet. 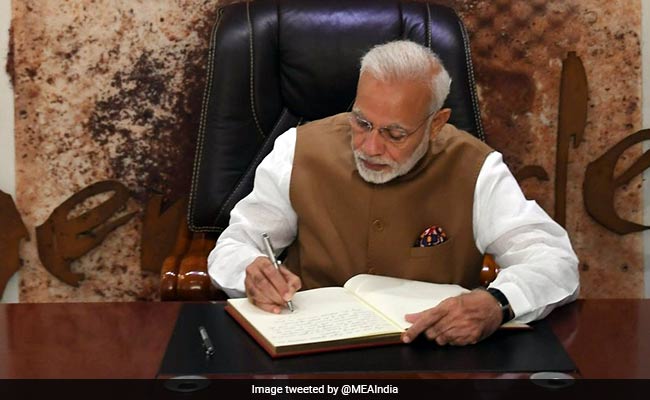 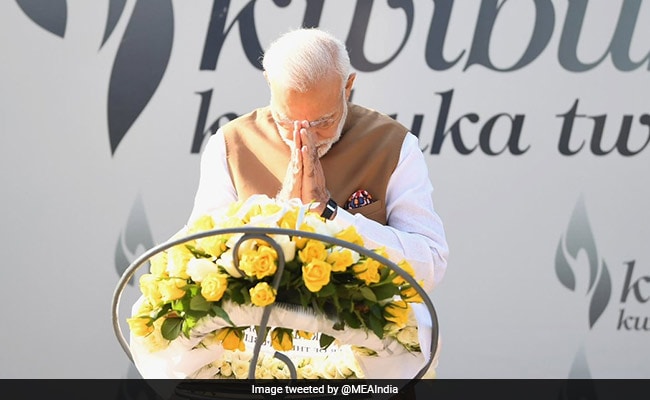 PM @narendramodi interacts with the Indian community during the community event in Kigali, Rwanda. pic.twitter.com/piowp9rypA

Enthusiastic reception at the community event in honour of PM @narendramodi in Kigali, Rwanda. Concluding a hectic day of engagement by meeting our own. pic.twitter.com/cl6VSvjLG4

Jul 24, 2018 11:10 (IST)
India has extended USD 200 million lines of credit to Rwanda for its economic development, signed a defence cooperation agreement and will soon open a High Commission here as part of New Delhi's efforts to bolster the strategic partnership with the fast-developing East African country, according to a Press Trust of India report.

The announcements came during Prime Minister Narendra Modi's visit to Rwanda, the first by an Indian prime minister to the country.

After his one-on-one talks with Rwanda's President Paul Kagame, Modi announced that India will soon open its mission in Rwanda, the report said.
Jul 24, 2018 10:59 (IST)
Praising the Indian diaspora's contributions, Prime Minister Narendra Modi today described them the ambassadors of India who are making a mark all over the world.

Read hereL PM Narendra Modi In Rwanda Says Indians Abroad Are Rashtradoots
The Indian community is making a mark all over the world and they are the country's "rashtradoots" (ambassadors), Prime Minister Narendra Modi told a gathering of Indians in Rwanda."
Jul 23, 2018 23:37 (IST)
Watch the joint statement here:

Jul 23, 2018 21:46 (IST)
A defence cooperation agreement is also expected to be signed between India and Rwanda during the visit, T S Tirumurti, secretary (Economic Relations) in the Ministry of External Affairs, said in New Delhi last week.
Jul 23, 2018 21:46 (IST)
After PM Modi's Rwandan counterpart introduced him to various ministers, there was a welcome performance at the airport by a group. Later, he sat down for talks with President Kagame. 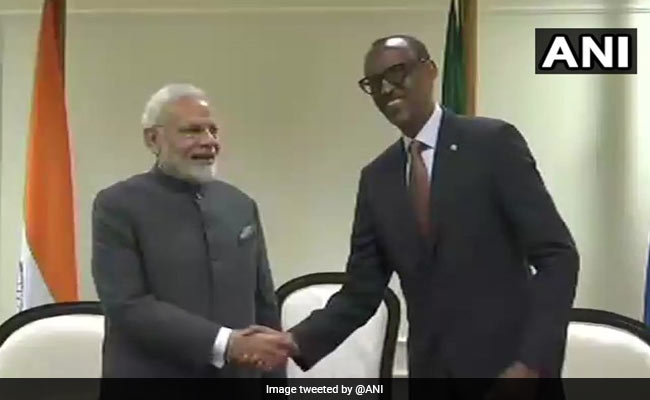 Kigali: PM Narendra Modi arrives in Rwanda. He has been received by President of Rwanda Paul Kagame. The PM is on a 5-day visit to Rwanda, Uganda and South Africa. pic.twitter.com/X6SPUZUuFg

Jul 23, 2018 20:11 (IST)
PM Modi is travelling with a 100-member business delegation. His visit starts as Chinese President Xi Jinping winds up his state visit of Rwanda.
Jul 23, 2018 18:26 (IST)
The Prime Minister was scheduled to reach Rawanda by 6 PM but his arrival seems to be delayed as there has been no update yet.
Jul 23, 2018 17:48 (IST)
On his 5-day visit Prime Minister Modi will also be in South Africa between 25 to 27 July to attend the BRICS (Brazil, Russia, India, China and South Africa) summit.
Jul 23, 2018 17:44 (IST)
PM Modi To Gift 200 Cows In Rawanda On His Visit
Prime Minister Modi who is on five-day, three-nation tour will make his first stop in Rawanda and will gift 200 cows as a part of Rwandan President Kagame's flagship Girinka program, in which the poorest get cows from the government and gift the first female calf to a neighbor to promote brother hood.
Jul 23, 2018 17:37 (IST)
High Commission Of India In Kampala has tweeted saying that Rwanda was all set to welcome Prime Minister Modi.

#NamoVisittoRwanda Rwanda is all set to Welcome the Hon. Prime Minister of India @DDNewsLive@narendramodi@PMOIndia@SushmaSwaraj@meaindia1@IndianDiplomacypic.twitter.com/ieYfs6axUm

6pm: PM Modi to reach Kigali International Airport in Rwanda and get a ceremonial reception

07:15pm: PM Modi to hold delegation level talks with his Rwandan counterpart and others

08:30pm: PM Modi to attend a banquet dinner hosted by the Rwandan President

09:45pm: PM Modi will attend a reception hosted by the High Commissioner of the Indian community in Rwanda

Embarking on a momentous journey to strengthen our historical bond with Africa! PM @narendramodi departs on a 3-nation tour to Rwanda, Uganda & South Africa from 23-27 July. This is PM's maiden visit to Rwanda & Uganda. In South Africa, PM will attend the 10th BRICS Summit. pic.twitter.com/K0uUkefrNn

Jul 23, 2018 16:28 (IST)
"India shares close, warm and friendly relations with Africa which are cemented by robust development partnership and a large presence of the Indian diaspora," the Prime Minister''s Office said in a pre-departure statement.
Jul 23, 2018 16:18 (IST)
A number of agreements and MoUs in the areas of defence, trade, culture, agriculture and dairy cooperation are scheduled to be signed during the Prime Minister's visit, the Ministry of External Affairs said in a statement.
Jul 23, 2018 16:18 (IST)
The Prime Minister is scheduled to visit the Genocide Memorial and participate in an event on "Girinka" (one cow per family), a national social protection scheme of Rwanda, which is personally initiated by the Rwandan President.