PM Modi UNGA Speech: PM Modi is addressing the UNGA for the third time since 2014

Prime Minister Narendra Modi addressed the 74th session of the UN General Assembly today and said the world needs to unite and have a consensus on fighting terrorism.

"Terrorism is one of the biggest challenges before humanity," PM Modi said in a 20-minute speech. PM Modi, the fourth speaker on the fourth day of the general debate, took the stage in the iconic hall at the UN headquarters in New York around 7:34 pm Indian time.

"Per capita wise India's contribution to global warming is very low, but we are a leading nation in mitigation plans," PM Modi said in his address.

Prime Minister Modi held a number of bilateral meetings with top world leaders like US President Donald Trump and German Chancellor Angela Merkel ahead of his UN address.

Foreign Secretary Vijay Gokhale had said PM Modi's UNGA speech "will focus on what the high-level segment of the UNGA is meant to focus on which is - as an important economy, as an important country, as a responsible member of the UN - PM will flag what we are doing for development, for security, for peace and our expectations and aspirations of other countries."

Pakistan Prime Minister Imran Khan also addressed the UN General Assembly on Friday. Mr Khan spoke about Kashmir and had earlier said he will "forcefully present the Kashmir issue like never before" in his address.

Here are the live updates of PM Modi's UNGA speech:

Sep 27, 2019 20:10 (IST)
PMO tweeted after Prime Minister Modi's UNGA speech:
Congratulatory messages pour in after the @UN General Assembly speech and so do the selfie requests.  Those who were able to witness PM  @narendramodi's speech at the UN personally convey their good wishes to him. 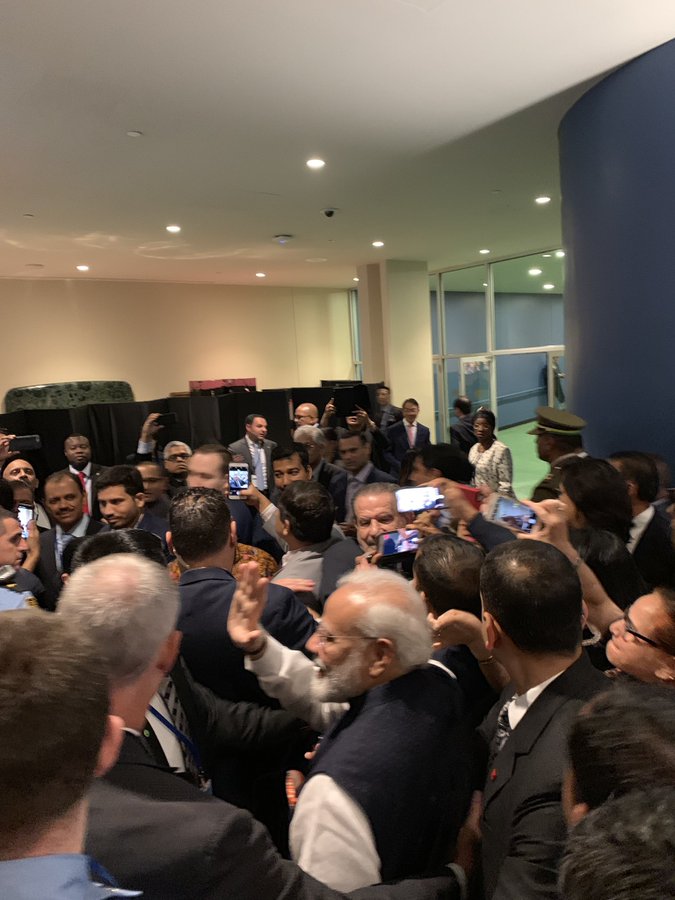 Sep 27, 2019 19:51 (IST)
PM Modi speech at UNGA: Prime Minister speaks at United Nations General Assembly
Swami Vivekananda had given a message of Harmony and Peace to the Parliament of Religions and not dissension. The world's biggest democracy still has the same message for the world: Harmony and Peace

Sep 27, 2019 19:49 (IST)
PM Modi speech at UNGA: Prime Minister on terrorism at United Nations General Assembly
We have given the world Buddha, not yuddha (war). That's why there is sincerity and anger towards combating terrorism. Terrorism is one of the world's biggest challenges in front of humanity. Terrorism hurts the principles on which UN was built. That's why the world needs to unite, have a consensus to combat terrorism. A divided world is in no one's interest. We must give a thrust to multilateralism and reforming the UN.
Sep 27, 2019 19:48 (IST)
PM Modi speech at UNGA: Prime Minister speaks at United Nations General Assembly
Global warming has also increased the frequency and ferocity of natural disaster. That's why we have formed the CDRI. I invite the world to join this coalition. India has sacrificed the most for UN's peacekeeping missions.

Sep 27, 2019 19:47 (IST)
UNGA 2019: PM Modi's speech at United Nations General Assembly
The issues India is raising, the new institutions India is forming for the world, they are a response to the crises in front of the world today. If you look at per-capita emission, India's contribution to global warming has been very low but India is at the forefront of the response. India is working on a target of 450 GW renewable energy, we have also formed the International Solar Alliance.
Sep 27, 2019 19:46 (IST)
BJP tweeted on PM Modi's speech at UNGA:

This year the whole world is celebrating the 150th birth anniversary of Mahatma Gandhi. His message of truth and non-violence is very relevant for us even today for peace, progress and development of the world: PM Modi #PMModiAtUNpic.twitter.com/GNIEQTSEb8

While coming here, I read on the wall of the United Nations building - "No more single use plastic".

I am happy to tell the gathering that while I am addressing you today, even at this time, we are running a big campaign to free India from single-use plastic: PM Modi #PMModiAtUNpic.twitter.com/CMbiB0NoVd 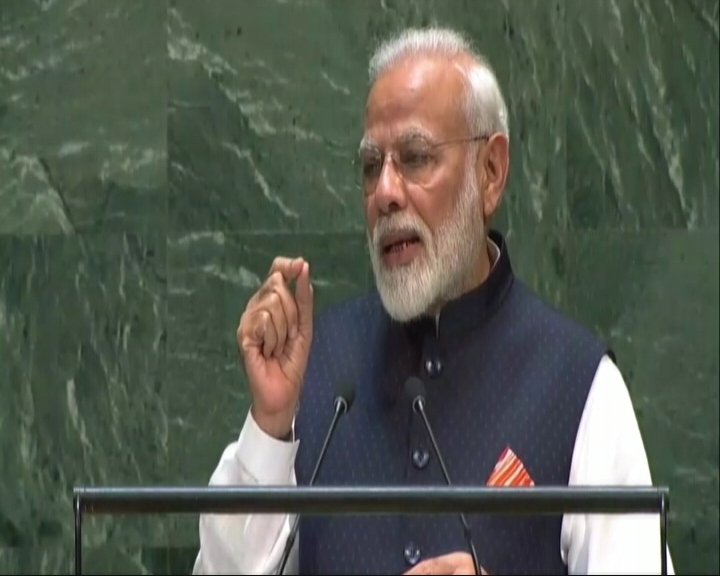 Sep 27, 2019 19:13 (IST)
Pakistan Prime Minister Imran Khan will also address the UN General Assembly on Friday. Mr Khan, who is slotted as the third speaker after PM Modi, has said that he will "forcefully present the Kashmir issue like never before" in his address at the UNGA session.

Pakistan has been trying to raise the Kashmir issue at international forums after India withdrew the special status of Jammu and Kashmir on August 5, enforcing severe security restrictions and a communications blackout. New Delhi has snubbed the efforts, asserting that revoking Jammu and Kashmir's privileges was its "internal matter".
Sep 27, 2019 18:52 (IST)
Prime Minister Narendra Modi's office tweeted ahead of the UNGA session:

All set for the @UN General Assembly session!

The speech of PM @narendramodi begins shortly. Do watch it LIVE. pic.twitter.com/63fWbgG0b7

Sep 27, 2019 18:33 (IST)
PM Modi is expected to speak about his government's achievements, climate crisis
"There are many pressing challenges for the international community - a still fragile global economy, turbulence and tension in many parts of the world, growth and spread of terrorism, climate change and the endemic global challenge of poverty," Prime Minister Narendra Modi said last week in a statement before leaving for New York.
"They require stronger global commitment and concerted multilateral action. I will reiterate our commitment to reformed multilateralism, which is responsive, effective and inclusive, and in which India plays her due role," PM Modi had said.
Sep 27, 2019 18:33 (IST)
Theme of the 74th session of the UN General Assembly:
The theme of this year's general debate at the 74th session of the UN General Assembly or UNGA is "Galvanising multilateral efforts for poverty eradication, quality education, climate action and inclusion".
Narendra ModiPM Modi UNGAPM Modi