In Bishkek, PM Modi Talks Tough On Terror In Message To Pakistan

PM Narendra Modi, in the presence of his Pakistani counterpart Imran Khan at the SCO summit in Bishkek, said that countries will have to come out of their narrow purview to unite against terrorism.

PM Narendra Modi arrived for the SCO summit in Bishkek on Thursday.

In a stern message directed at Pakistan at the Shanghai Cooperation Organisation (SCO) summit in Kyrgyzstan's capital Bishkek on Friday, Prime Minister Narendra Modi said that countries sponsoring, aiding and supporting terrorism must be held accountable. India stands for a terrorism-free society, he said.

Underscoring the aim of the SCO to strengthen cooperation in the fight against terrorism, PM Modi called for a global conference to combat it.

Countries will have to come out of their narrow purview to unite against terrorism to fight it, PM Modi said in the presence of his Pakistani counterpart Imran Khan.

"During my visit to Sri Lanka last Sunday, I visited the St Anthony's church, where I witnessed the ugly face of terrorism which claims the lives of innocents anywhere," he said.

Following the meeting on Friday, all member countries of SCO had come to a consensus on a statement against terrorism, the Foreign Ministry said. "[They] are coming out with a joint declaration. It is a strong statement endorsed by all the member countries," it added.

PM Modi arrived in the Kyrgyz capital on Thursday for the two-day SCO summit. The SCO is a China-led 8-member economic and security bloc to which India and Pakistan were admitted in 2017. 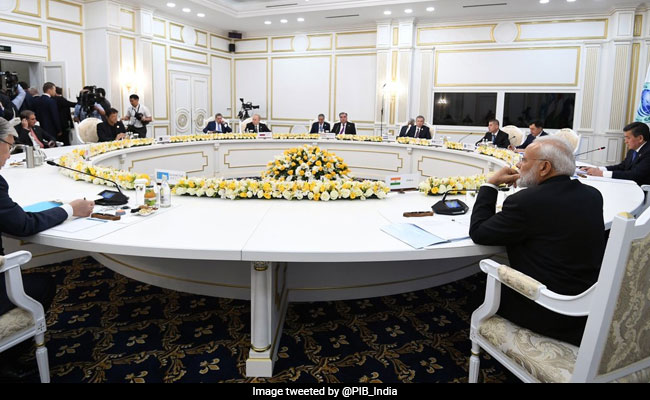 PM Modi (right), Imran Khan (across the table) at the SCO Summit in Bishkek.

During his bilateral meet with Chinese President Xi Jinping on the sidelines of the summit on Thursday, PM Modi reiterated India's stand that Pakistan should take concrete action against terror before talks can resume.

New Delhi's views on talks and terror not going hand in hand has gained strength after the terror attack in Pulwama, the foreign ministry said.

"Pakistan needs to create an atmosphere free of terror, but at this stage we do not see it happening. We expect Islamabad to take concrete action" to resume talks, foreign secretary Vijay Gokhale quoted the Prime Minister as telling President Xi.

Ahead of the summit, Pakistan Prime Minister Imran Khan and Foreign Minister Shah Mehmood Qureshi had written separate letters to their Indian counterparts, pushing for resumption of bilateral talks. After assuming office too, Imran Khan had written to PM Modi, seeking dialogue on all issues, including Kashmir.

But no bilateral interaction was scheduled between PM Modi and Imran Khan during the summit, where the two leaders are meeting for the first time since the cricketer-turned politician took over as the Prime Minister of Pakistan.

India's pressure on Pakistan to take action on terrorists acting from its soil spiked after the February 14 terror attack in Jammu and Kashmir's Pulwama, in which 40 soldiers died.

In a huge diplomatic win for India, China also lifted its technical hold on listing Pakistan-based terrorist Masood Azhar as a global terrorist by the UN. Beijing said it took the decision after it found no objection from the US, UK and France.