Hiraba Modi distributed national flags to children at her residence and waved the tricolour with them, a government release said. 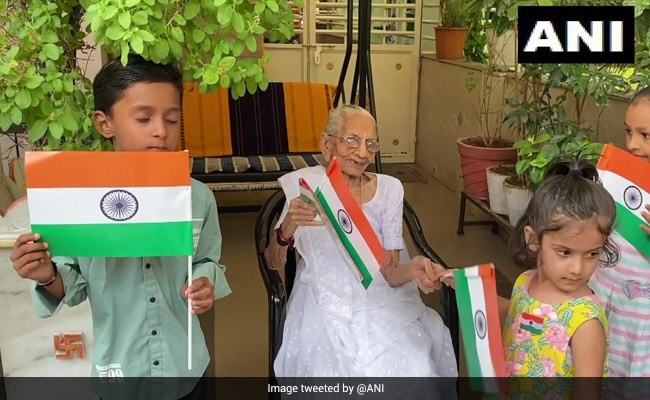 Prime Minister Narendra Modi's mother Hiraba Modi, who entered the 100th year of her life in June this year, on Saturday distributed national flags to children at her residence on the outskirts of Gandhinagar city in Gujarat.

Chief Minister Bhupendra Patel kicked off the three-day "Har Ghar Tiranga" campaign to commemorate the 75th anniversary of Independence by hoisting a huge tricolour on a 100-feet tall flag post at Children's University in the state capital on Saturday.

Under this campaign, Hiraba Modi distributed national flags to children at her residence and waved the tricolour with them, a government release said.

She lives with the Prime Minister's younger brother Pankaj Modi.

"Tiranga Yatra" was organised in different parts of Gujarat with BJP MLAs and ministers participating in rallies with people carrying the tricolour.

Earlier in the day, Gujarat BJP president CR Paatil participated in a seven-km rally at Vijapur in the Mehsana district in the presence of senior Bharatiya Janata Party (BJP) leaders, MLAs and former MLAs.

In Vadodara, BJP MP Ranjan Bhatt took out a "Tiranga Yatra' with local MLAs. Similar celebrations were witnessed in other cities and towns of Gujarat.