PM's 'Discipline' Class For BJP Lawmakers This Weekend. Attendance A Must

The BJP's "Abhyas Varga", an exercise already in effect in various states including Himachal Pradesh, is believed to be an effort to familiarise young, first-time lawmakers and also the seasoned lawmakers of their rights and responsibilities. 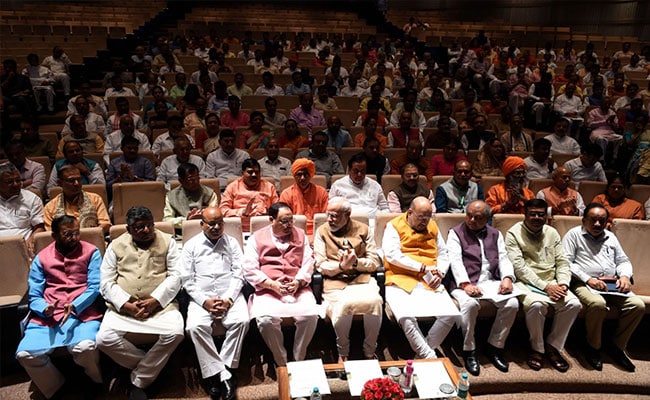 The BJP is organising a two-day training session for its lawmakers on August 3 and 4.

A day after it was announced, the main purpose behind the compulsory weekend workshop of the BJP seems to be to rein in some erring lawmakers.

All through his second tenure, Prime Minister Narendra Modi has stressed on discipline, punctuality and not speaking out of turn. Some of his other suggestions to the lawmakers include punctuality and regular attendance in parliament.

Taking this message to the next level, the BJP has initiated a weekend workshop for its lawmakers. The "Abhyas Varga", an exercise already in effect in various states including Himachal Pradesh, is believed to be an effort to familiarise young, first-time lawmakers and also the seasoned lawmakers of their rights and responsibilities.

A two-day orientation programme for the newly elected BJP lawmakers will be organised on August 3 and 4 with an aim to impart training and enhancing parliamentary and public conduct to the lawmakers.

"Many MPs (Members of Parliament) are first-timers. There are also those who have joined us from other political parties. It thus becomes important to organise events that will not only familiarise them with the party but also lay down what is expected of them," said a senior leader of the BJP on the condition of anonymity.

He said that "Abhyas Varga" workshops could happen regularly.

Apart from an orientation exercise, the workshop is a reflection of PM Modi's growing concerns over erring lawmakers, sources told NDTV.

The list is long, and most of these cases pertain to discipline issues.

After a go-slow warning, the party seems to have buried the case in its internal procedure as far as disciplinary action is concerned. But last week, she blundered into yet another controversy when she told BJP workers at a meeting that she "wasn't elected to get drains and toilets cleaned".

For this remark, she was pulled up by her party leadership. Sources say Pragya Thakur was summoned by the BJP's working president JP Nadda, who reprimanded her and told her to refrain from such comments.

Lawmaker Ram Shankar Katheria's guards were seen beating up toll plaza employees near Agra. Mr Katheria too could be seen in CCTV images of the incident.

BJP parliamentarian Sakshi Maharaj, known for his polarizing remarks, had visited jailed BJP legislator Kuldeep Sengar who is accused of raping a teenager in Uttar Pradesh's Unnao in 2017.

The list includes state legislators too. The Prime Minister seems to be upset with incidents such as Uttarakhand BJP lawmaker Kunwar Pranav Singh 'Champion' showing off weapons and Madhya Pradesh leader Akash Vijavargiya thrashing a civil servant with a bat.

Earlier this month, PM Modi had to pull up Union Ministers for missing from the parliament roster duty while the session was on. This left the BJP embarrassed as there was no government representative on certain days to take the opposition's questions.

Many lawmakers reportedly have a poor attendance record. These include actor-politicians Hema Malini and Sunny Deol.

In the first meeting with BJP lawmakers after his new government was sworn in, PM Modi had warned his lawmakers to stay away from 'Dilli ki hawa (The air of Delhi)', suggesting that lawmakers must refrain from chapaas (being written about) and dikhaas (being seen on TV).

"Perhaps this is the reason why the Abhyas Varga is not an optional exercise", a senior BJP leader said.