PM Modi also watched people, dressed in colourful attires, perform garba, a popular folk dance of Gujarat, for over half an hour. 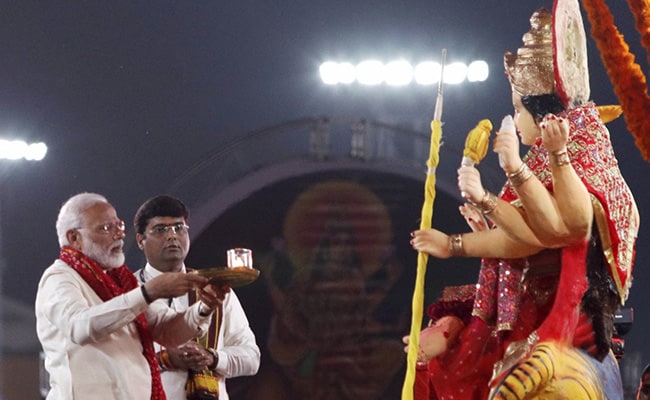 PM Modi, as Gujarat chief minister, had started a state-level garba function at the GMDC Ground

Prime Minister Narendra Modi performed ''aarti'' of Goddess Amba and also witnessed people playing ''garba'' at the GMDC Ground here on the occasion of Navratri, a major festival of Gujarat.

PM Modi reached the GMDC Ground to participate in the ''aarti'' performed before the start of garba at the venue of the state government-organised Navratri celebrations.

He watched people, dressed in colourful attires, perform garba, a popular folk dance of Gujarat, for over half an hour.

The PM, who was on a day-long visit to his home state, then left for the airport.

Navratri, meaning ''nine nights'', is one of the most popular and widely celebrated festivals in Gujarat. Each night, people in villages and cities alike, gather in open spaces to celebrate feminine divinity, referred to as Shakti.

PM Modi, as Gujarat chief minister, had started a state-level garba function at the GMDC Ground, a tradition which has been continued by the BJP government.

PM Modi had promoted Navratri as the longest dance festival. As CM, he had showcased the garba as a unique culture of the state and appealed to tourists to come in large number and join the celebrations.

The PM was in the city to pay tribute to Mahatma Gandhi and declare India open defecation-free on the 150th birth anniversary of the Father of the Nation.