Priyanka Gandhi was referring to PM Modi's surprise stopover in Pakistan in December 2015 to meet his then counterpart Nawaz Sharif. 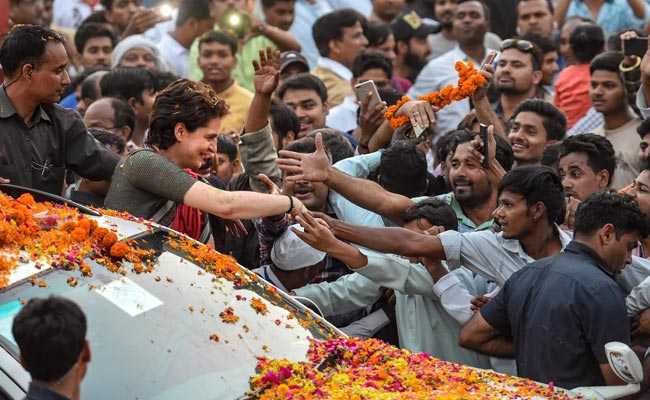 Congress General Secretary Priyanka Gandhi Vadra on Friday took a dig at Prime Minister Narendra Modi, saying that he had gone to Pakistan in 2015 to eat biryani. Responding to a query over PM Modi's remarks that people in Pakistan will applaud if Congress wins the Lok Sabha elections, Priyanka Gandhi said: "It's their view."

When pressed further for her views on the Prime Minister's comments made during his rally in Meerut on Thursday, she said: "He (Modi) had gone to Pakistan to eat biryani," referring to PM Modi's surprise stopover in Pakistan in December 2015 to meet his then counterpart Nawaz Sharif.

The Congress General Secretary in-charge of Uttar Pradesh East was speaking to the media after interacting with students at the Sun Beam Public School.

Priyanka Gandhi also said that she would not offer prayers at the Ram temple in Ayodhya as the matter was sub-judice in court.

On the third day of her campaign in Uttar Pradesh, Priyanka Gandhi held a mega road show in the temple town covering a distance of over 15 km as scores of Congress workers hit the road in support of their leader, raising anti-Modi slogans.

Several posters were also put up in the city which read: "Indira Gandhi returns".

The road show started from the Sun Beam Public School and concluded at the Hanuman Garhi temple after passing through several areas of the temple town. Priyanka Gandhi then offered prayers at the temple before leaving for Lucknow.

Priyanka Gandhi also provided first-aid to a party worker who injured his hand after being pushed by a Special Protection Group (SPG) officer while attempting to meet the Congress leader.

Vishal Sonkar, the injured person, later told IANS: "I was going to present a photograph of Indira Gandhi to Priyanka Didi. However, as I was about to reach her, an SPG officer pushed me and the photo frame broke and the glass pierced my hands. Noticing this, Priyanka Didi called me and provided me with first-aid."

Earlier in the day, Priyanka Gandhi hit out at PM Modi and said that he "only met and greeted the rich" and had no time to meet people from the villages.

Priyanka Gandhi said this as she huddled with a group of women under the scorching sun in Atka village and Naua Kuan in Faziabad district.

Addressing the party workers, Priyanka Gandhi said: "I asked people if development happened in your villages and they replied that a 15 km road has been made. I asked them when was the road approved and the people said it was approved under the Congress government, but only 15 km of road has been made for publicity."

The Congress leader then said that when she asked the people if Modiji came to their villages, they replied "not even once in the last five years as he remains busy in doing publicity".

Targeting the Prime Minister over his foreign trips, Priyanka Gandhi said: "He goes to foreign lands and hugs the people there. But he does not hug the poor in India."

"The government has waived off the loans of several industrialists but they don't have money for the people of the country. This government wants to snatch poor people's employment. But the Congress will give Rs 72,000 to each poor family through NYAY," she said.

The Congress leader also targeted PM Modi over his 56-inch chest remark. She said political power was not a tool for publicity but it was for listening and serving the people.

Accusing the BJP of diverting attention from the real issues, she said they talk of "Mai Bhi Chowkidaar", but now the farmers are compelled to save their produce by acting as watchmen.

"They are insulting you. They want to divert your attention. The BJP wants to ensure that whatever lie they say should be shown as a full package and people get diverted (from real issues)," she said.

Coming down heavily on the Prime Minister, Priyanka Gandhi said: "If you cannot listen to the voice of your own people, what kind of power do you have?"

She also called the BJP's 2014 promise of giving Rs 15 lakh to every citizen only "rhetoric".

Priyanka Gandhi said it was the Congress which had introduced people-friendly schemes such as the Mahatma Gandhi National Rural Employment Guarantee Act (MGNREGA) to give employment to people across the country.

"When they were in the opposition, they opposed the MGNREGA. But as soon as they came to power, they realised how good the scheme is," she said.

"These projects have now gone into the hands of contractors," Priyanka Gandhi alleged, adding that the enrolled people were not getting money for over six months now.

Earlier in the day, while going from Rae Bareli to Faizabad, Priyanka Gandhi made brief halts at several places. She met women workers along the way and also paid obeisance at the Materva Mazaar in Amethi.

The 47-year-old became nostalgic when a Muslim family reminded her of her grandmother and former Prime Minister Indira Gandhi's visit to their village in the 1980s.

Comparing her party's politics with that of the BJP, Priyanka Gandhi said: "Their politics is of lie and publicity. It won't work anymore."

She also said that Rahul Gandhi has been vocal about the plight of the farmers for quite some time now. She reminded the people that he had even gone to Bhatta Parsaul to fight for their rights.