PM Modi thanked President Vladimir Putin for his personal commitment to strengthening bilateral relations with India and said that he looked forward to welcoming President Putin in India for the next bilateral summit at a mutually convenient date. 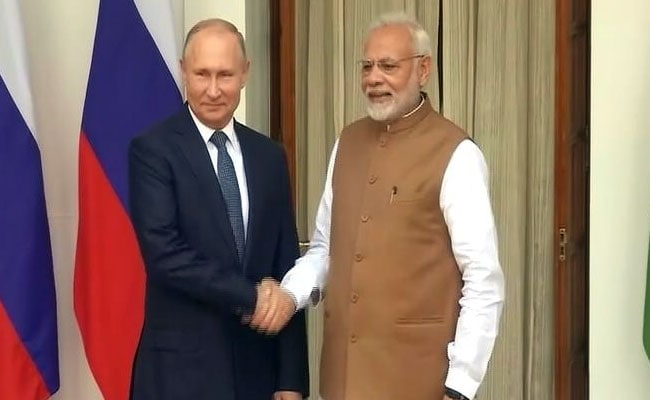 A number of world leaders had wished PM Modi on his 70th birthday on Thursday.

Prime Minister Narendra Modi and Russian President Vladimir Putin on Friday voiced a strong commitment to further strengthen the ''special and privileged strategic partnership'' between India and Russia, during a telephonic conversation.

The Ministry of External Affairs (MEA) said PM Modi thanked Vladimir Putin for his personal commitment to strengthening bilateral ties, and said he looked forward to welcoming him in India for the next India-Russia summit at a mutually convenient date.

It was Vladimir Putin who initiated the phone call.

"Both leaders reiterated their strong commitment to further strengthen the ''special and privileged strategic partnership'' between India and Russia, and expressed appreciation for the continued momentum in bilateral interactions despite the COVID-19 pandemic," the MEA said.

It said they also referred to the "recent productive" visits to Moscow by Defence Minister Rajnath Singh and External Affairs Minister S Jaishankar.

The two ministers travelled to Russia to attend separate meetings of eight-nation bloc Shanghai Cooperation Organisation (SCO). Both Rajnath Singh and S Jaishankar held extensive talks with their Russian counterparts during the visits.

The MEA said PM Modi thanked Vladimir Putin for the successful Russian chairmanship of the SCO and BRICS (Brazil-Russia-India-China-South Africa) this year.

"He conveyed his eagerness to participate in the forthcoming SCO and BRICS Summit later this year, as well as the Council of SCO Heads of Government to be hosted by India," it said.

As chair of SCO and BRICS, Russia is scheduled to hold the summit meetings of the two key groupings later this year. India is set to host the annual summit of Council of SCO heads of government.

The MEA said the Russian president conveyed his greetings on PM Modi's birthday and the prime minister expressed his warm appreciation for the gesture.

A number of world leaders had wished PM Modi on his 70th birthday on Thursday.