PM Modi's swearing-in ceremony will begin at 7 pm, with nearly 8,000 guests attending an event that's reflective of the BJP's massive win in the elections.

Narendra Modi will take oath for the second consecutive term as Prime Minister this evening.

Prime Minister Narendra Modi will take oath for the second consecutive term this evening, exactly a week after he stormed back to power on May 23, but his day began at the crack of dawn.

The memorial of Mahatma Gandhi at Rajghat was one of the first places PM Modi visited in the national capital at 7 am. He also paid his respects at the memorial of late Prime Minister Atal Bihari Vajpayee. Sadaiv Atal Samadhi, the lotus-shaped monument dedicated to Mr Vajpayee - who led India between 1996 and 2004 - was inaugurated last December, a few months after his death on August 16.

He then visited the National War Memorial near India Gate. The monument, spread over 40 acres, is dedicated to soldiers killed in service of the country over the decades. 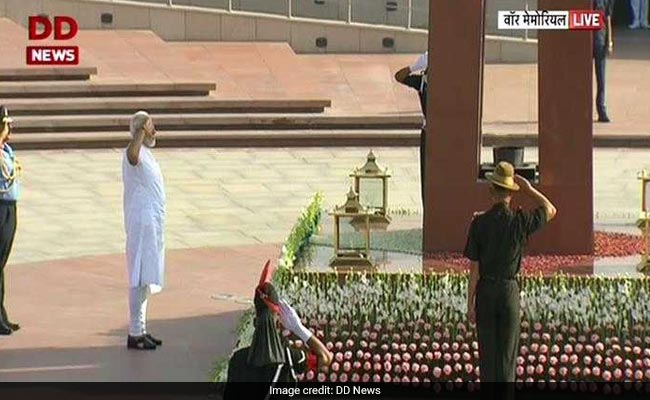 PM Modi visited the National War Memorial in Delhi ahead of his swearing-in ceremony.

Snipers have been deployed atop specific structures as PM Modi visits the three monuments through the morning, news agency PTI quoted a senior police officer as saying. Yesterday, he had spent a busy evening deliberating on members of his future cabinet with BJP chief Amit Shah.

Despite a spirited campaign by the Congress as well as other opposition parties, the BJP-led National Democratic Alliance returned to power with a massive haul of 352 seats in the Lok Sabha elections. The BJP, led from the front by Prime Minister Narendra Modi, managed to bag 303 seats on its own -- miles ahead of the Congress' 52. Many political parties, such as the CPM and Lalu Yadav's Rashtriya Janata Dal, were all but decimated when the votes were counted last Thursday.

The swearing-in ceremony will begin at 7 pm, with nearly 8,000 guests attending an event that's reflective of the BJP's massive win in the elections. It will be attended by leaders of BIMSTEC countries, namely Bangladesh, India, Myanmar, Sri Lanka, Thailand, Nepal and Bhutan, in line with the government's "Neighbourhood First" policy.

Apart from world leaders, dignitaries drawn from political and social circles across India -- chief ministers, party leaders, industry leaders, diplomats, ambassadors, celebrities and members of the Opposition -- will also be present at the event held in the forecourt of Rashtrapati Bhavan. More than 100 non-resident Indians will fly in to witness PM Modi being sworn in. 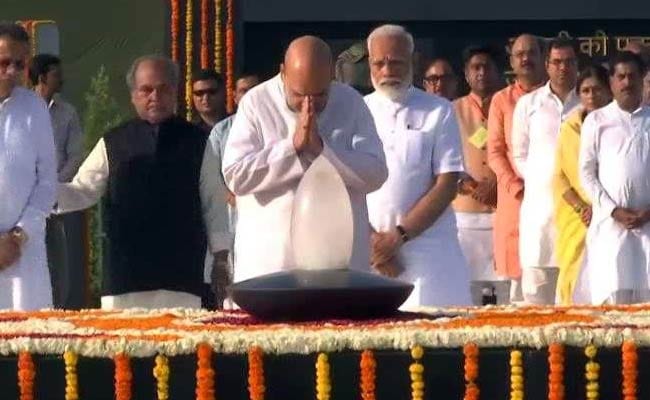 Sources have confirmed that Congress president Rahul Gandhi and his mother, Sonia Gandhi, will also be present at the oath ceremony. Their decision gains significance in the light of the acrimonious exchanges between the two parties during the election season, which saw PM Modi and other BJP leaders relentlessly targeting the Gandhi family and the latter hitting back just as ferociously.

While many chief ministers of non-BJP states are expected to drop by, a notable exception is West Bengal's Mamata Banerjee, who claims that the BJP is trying to politicise the occasion. She has accused the BJP of falsely claiming that 54 of its workers were killed in political violence across the state and then inviting their families to the event.

News agency PTI said that while over 10,000 security personnel from the Delhi Police and paramilitary forces have been deployed for the swearing-in ceremony, over 2,000 others will secure the route meant to be taken by PM Modi and foreign dignitaries.