This is PM Modi's first visit to Puducherry since becoming the prime minister. He will first visit the Aurobindo Ashram in the union territory and pay homage to its founder spiritual leader Sri Aurobindo. 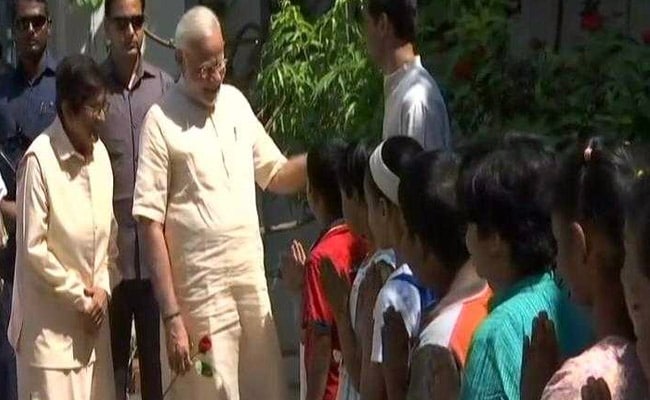 This is PM Modi's first visit to Puducherry since becoming the prime minister. He will first visit the Aurobindo Ashram in the union territory and pay homage to its founder spiritual leader Sri Aurobindo.

Here are the highlights of PM Modi's visit to Puducherry:

Govt Of Puducherry worked vhard to ensure excellent arrangements for Honble PM's visit to Puducherry.
It was the highest point of our career. We thoroughly loved having our Prime Minister amidst us.
We r already missing his presence@PMOIndia@AshwaniKumar_92@rajnathsinghpic.twitter.com/aVnlWjpLAc

This is PM Narendra Modi's first visit to Puducherry after becoming Prime Minister.
Feb 25, 2018 13:29 (IST)
India has always allowed mutual respect & co-existence of different religions and cultures. India is home to the age old tradition of Gurukul, where learning is not confined to classrooms. Auroville too has developed as a place of un-ending and life-long education: PM
Feb 25, 2018 13:29 (IST)
The fact that Auroville has brought together such huge diversity of people and ideas makes dialogue and debate natural. Indian society is fundamentally diverse. It has fostered dialogue & a philosophic tradition. Auroville show-cases this ancient Indian tradition to the world: PM
Feb 25, 2018 13:29 (IST)
As the world progresses materially through science and technology, it will increasingly long for and need spiritual orientation for social order and stability. At Auroville, the material and the spiritual, co-exist in harmony: PM
Feb 25, 2018 13:26 (IST)
Maharishi Aurobindo's philosophy of Consciousness integrates not just humans, but the entire universe. This has been translated by Mahatma Gandhi to mean "everything down to the tiniest  atom is divine": PM
Feb 25, 2018 13:25 (IST)
Auroville has brought together men and women, young and old, cutting across boundaries and identities. I understand that Auroville's Charter was hand-written in French by the Divine Mother herself. According to the Charter, the Mother set five high principles for Auroville: PM
Feb 25, 2018 13:25 (IST)
Prime Minister Narendra Modi speaks

It is important today to remember the vast extent of action and thought of Shri Aurobindo. A man of action, a philosopher, a poet, there were so many facets  to his character. And each of them was dedicated to the good of the nation and humanity: PM
Feb 25, 2018 12:59 (IST)
PM Modi has releases commemorative postage stamp

PM Modi released the commemorative postage stamp on the occasion of Auroville's golden jubilee. He will soon address a public meeting in Puducherry.
Feb 25, 2018 10:37 (IST)
PM Modi has arrived at Puducherry

Prime Minister Narendra Modi has arrived at Puducherry. He will be attending attending Auroville's 50th anniversary celebrations. He will visit the Aurobindo Ashram in the union territory and pay homage to its founder spiritual leader Sri Aurobindo.

This is his first visit to Puducherry since he became Prime Minister.