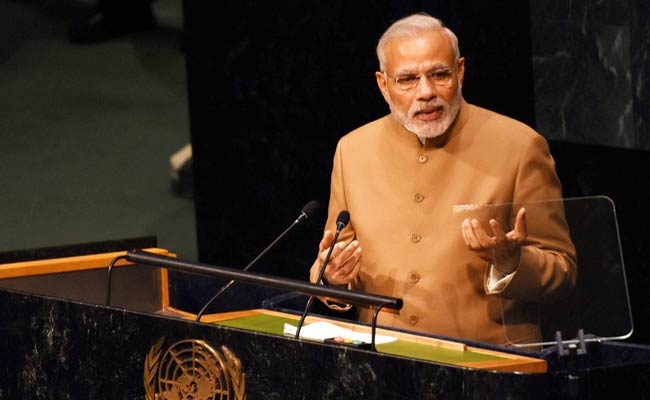 As prime minister, Narendra Modi had given his maiden address at the UNGA in 2014.

Prime Minister Narendra Modi will address the annual high-level UN General Assembly session on September 27 and will have a packed agenda of bilateral and multilateral engagements during his nearly week-long stay in New York.

According to an updated list of speakers for the General Debate of the 74th session of the UN General Assembly (UNGA), PM Modi will address the high-level session on the morning of September 27.

According to the list of speakers, Pakistan's Prime Minister Imran Khan is scheduled to address global leaders on September 27. Imran Khan will address the UNGA session shortly after PM Modi's address.

The initial speakers' list indicates that about 112 Heads of State, nearly 48 Heads of Government and over 30 Foreign Ministers will arrive in New York to address the General Debate. The General Debate will commence on September 24 and run through September 30.

US President Donald Trump, who had delivered his first address to global leaders from the General Assembly hall's iconic green podium in 2017, will address the high-level session on the morning of September 24.

The US is traditionally the second speaker on the opening day of the General Debate, after Brazil. PM Modi has a packed agenda of bilateral and multilateral engagements in the UN and New York area during his nearly week-long visit to the city. He will be honoured by the Bill and Melinda Gates Foundation. The Indian leader will be presented with the 2019 'Global Goalkeeper Award', which according to the Foundation is a "special recognition" that celebrates a political leader who has "demonstrated their commitment to the Global Goals through impactful work in their country and/or globally."

PM Modi will be honoured for his leadership of the Swachch Bharat Mission, which he had launched on October 2, 2014. The ambitious mission aims to accelerate the efforts to achieve universal sanitation coverage in the country by this year as a tribute to Mahatma Gandhi on his 150th birth anniversary.

As the world commemorates Mahatma Gandhi's 150th birth anniversary, PM Modi will also host a special event 'Leadership Matters: Relevance of Gandhi in the Contemporary World' on September 24 in the Economic and Social Council (ECOSOC) Chamber in the UN Headquarters. He will also be the keynote speaker at the Bloomberg Global Business Forum on September 25.

Before arriving in New York for the UNGA session, PM Modi is expected to visit Houston where he will address the Indian-American community on September 22. "Howdy, Modi!", the Indian-American community summit, will be hosted by the Texas India Forum, the Houston-based non-profit. The event is expected to be attended by tens of thousands of people, including influential US lawmakers and political leaders.