India stood out among top emitters, including the U.S. and China, that were being closely watched at the conference.

PM Modi's announcement is consistent with what research shows is needed to meet that target.

Prime Minister Narendra Modi surprised delegates at the COP26 climate summit with a bold pledge: the world's third-biggest emitter will reach net-zero by 2070.

The announcement injected new life into talks that had been set back by a disappointing outcome from the Group of 20 meeting in Rome this weekend. Though India's goal is two decades behind rich nations such as the U.S. and U.K., it's compatible with what scientists say is needed to avoid catastrophic global warming.

"This was a very significant moment for the summit," said Nicholas Stern, chairman of the Grantham Research Institute on Climate Change and the Environment at the London School of Economics. It's a chance for India to show that "it can deliver on both economic development and climate change."

India stood out among top emitters, including the U.S. and China, that were being closely watched at the conference. President Joe Biden, hamstrung by politics at home, didn't bring anything substantially new to the table. Meanwhile China's Xi Jinping didn't attend in person and offered no new plans to cut emissions.

The challenge for India is figuring out how to finance the transition to net zero, which will require trillions of dollars of investment. PM Modi reiterated his stance that rich countries should help support poor nations by raising more money to accelerate the shift to clean energy -though he didn't specify how much exactly India would need from the international community.

"It is India's expectation that the world's developed nations make $1 trillion available as climate finance as soon as possible," PM Modi said, a figure that's 10 times more than the annual climate finance target set by rich countries. "Justice would demand that those nations that have not kept their climate commitments should be pressured."

Bloomberg reported earlier that PM Modi's office had been working on modeling what was needed to get to net zero. But the officials balked at setting a goal without strong financing commitments from rich nations.

On Monday, PM Modi backed up his 2070 net-zero goal with more aggressive near-term targets. He raised India's 2030 target for low-emission energy capacity to 500 gigawatts from 450 GW and pledged to produce half the country's electricity using renewable energy. India will also cut carbon-dioxide emissions 1 billion tons from business as usual by the end of the decade. To deliver on the 2070 goal, the country still has to lay out a detailed plan for the 40 years in between.

Earlier in the day, U.K. Prime Minister Boris Johnson kicked off the COP26 summit by urging world leaders to "defuse the bomb of climate change." With helicopters buzzing overhead, delegates swarmed through the vast conference center along the banks of the river Clyde and long lines formed as organizers struggled to accommodate the crowds.

One of COP26 President Alok Sharma's hopes for the Glasgow summit is to eke out enough commitments from countries to keep the Paris Agreement's stretch goal of limiting warming to 1.5 degrees Celsius relative to pre-industrial levels within reach.

PM Modi's announcement is consistent with what research shows is needed to meet that target. To keep temperatures from rising more than 1.5°C, the UN's Intergovernmental Panel on Climate Change projects that the world has to reach net-zero carbon dioxide emissions by about mid-century and then hit net zero across all greenhouse gases by 2070.

"Country-wise net zero cannot be the same for all nations," said Arunabha Ghosh, chief executive officer of the Council on Energy, Environment and Water, who has advised the prime minister's office. India's target is "equitable and just," he said.

It's in India's interest to stem global warming, even if the problem was caused mainly by carbon dioxide accumulated in the atmosphere by countries that industrialized first. The nation of 1.3 billion people is one of the most vulnerable to climate impacts. Extreme weather events like heat waves, floods and disruptions to the rainy monsoon season will have devastating impacts. 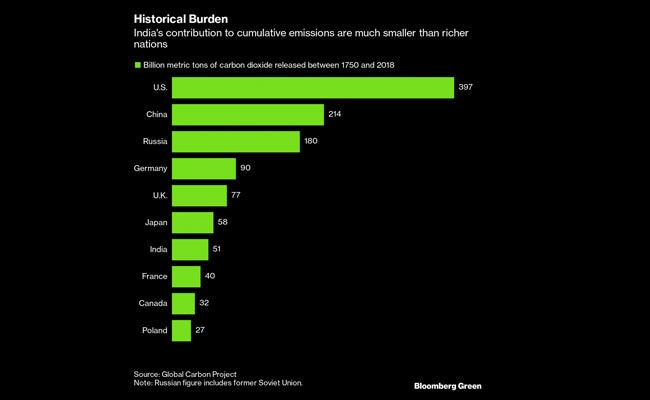 At the COP26 opening, developing nation leaders expressed frustration that rich countries have failed repeatedly to deliver on a promise to mobilize more funds to help them decarbonize and adapt to a warming planet. Still, in their speeches on Monday, it was smaller and poorer countries that stepped up.

Nepal and Thailand also set new carbon neutrality targets, for 2045 and 2050, respectively. Meanwhile Canada and Australia declined to set new short-term emissions targets, though they did pledge some new money toward financing the transition.

"In the last few months, India has been lining up policies that can take it towards these goals, policies about hydrogen, electric vehicles, renewable energy and industry decarbonization," said Chandra Bhushan, president of New Delhi-based International Forum for Environment, Sustainability and Technology. "Now India needs investments."

--With assistance from Jess Shankleman.