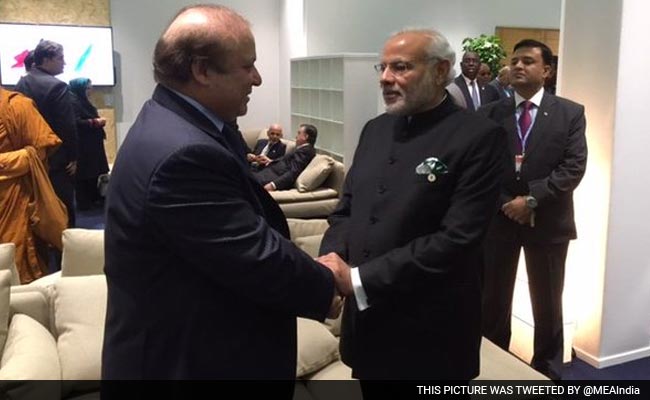 Mumbai: In a sarcastic take on Narendra Modi and Nawaz Sharif's hand shake on sidelines of the climate summit in Paris, the Shiv Sena today said the Prime Minister has displayed "huge tolerance" by shaking hands with his Pakistani counterpart.

PM Modi and Mr Sharif had a brief meeting on Monday in Paris on the sidelines of the UN climate summit during which they warmly held hands before sitting down for a chat amidst frosty ties between the two neighbours.

"Modi has shown huge tolerance by shaking hands with Mr Sharif. Even if the other (party) raises hand, we should fold ours. This is our tolerance and Modi has displayed it," an editorial in Sena mouthpiece 'Saamana' said.

The editorial further said that "now nobody has to leave the country on the pretext that there is an atmosphere of intolerance. The country is on the right mode and Modi's critics should remember that."

"Isn't shaking hands gently with PM of a country whose terrorists are killing our soldiers an act of tolerance? The furore over intolerance in the country should now subside with this display of tremendous tolerance by Modi," the Sena said.

Taking a jibe at the Pakistan Prime Minister, the editorial said that by choosing the 'muhurat' of 26/11 to sign a letter of approval for the India-Pakistan cricket series, Mr Sharif has in a way paid tributes to 26/11 terrorist Kasab.

"(We are sure) Modi must have questioned Sharif over this," the ruling alliance partner said.

"Modi is doing whatever he can to bring good days to the country and he is touring and flying on a massive scale for the same," it said.

The Sena further said that "If a small country like Nepal warns of taking our soldiers captive, then the time has come to debate where India is going wrong."

"Who knows, one day the Nepal leader will also meet Modi 'suddenly' as Sharif met in Paris and the bilateral issues will be resolved in their talks held while standing," it added.

Notably, the Shiv Sena has been opposed to resuming cultural and sports ties with the neighbouring country.

The party had also opposed the launch in Mumbai of a book written by former Pakistan foreign minister Khurshid Mahmud Kasuri and Sena activists had later blackened the face of the event organiser Sudheendra Kulkarni.