At the KVIB stall, a smiling PM Modi stopped to browse through some khadi jackets that he is often seen wearing. After choosing one, he paid for the purchase using his RuPay debit card. 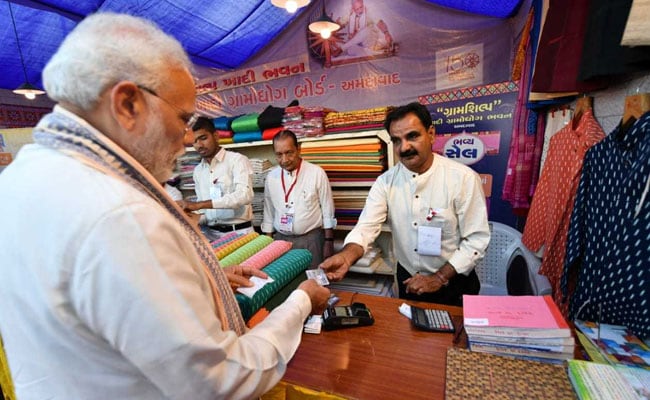 PM Modi paid for the purchase of the jacket using his RuPay debit card.

Prime Minister Narendra Modi, on a three-day visit to Gujarat, inaugurated the ninth edition of the Vibrant Gujarat Global Summit today. After inaugurating the Ahmedabad shopping festival, he purchased a jacket from one of the stalls.

At the KVIB stall, a smiling PM Modi stopped to browse through some khadi jackets that he is often seen wearing. After choosing one, he paid for the purchase using his RuPay debit card.

RuPay is an Indian domestic card scheme conceived and launched by the National Payments Corporation of India on March 26,2012.  PM Modi has pushed for the use of RuPay -- termed as India's answer to international payment agencies Visa and Mastercard -- while promoting digital payments under his Digital India campaign. 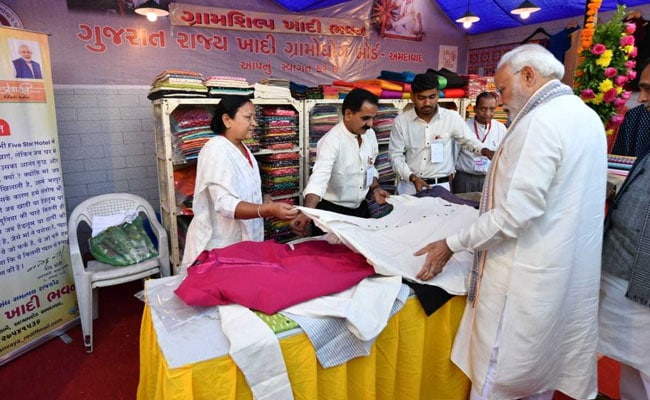 At the KVIB stall, a smiling PM Modi stopped to browse through some khadi jackets

Last year, PM Modi had narrated a story of how he used his RuPay card to buy some goods during a Singapore visit. The card works well outside India too, he had concluded.

After the inauguration, PM Modi went on to address the public. "Both Vibrant Gujarat and the Ahmedabad Shopping Festivals are admirable initiatives," he said.

PM Modi also tweeted a picture of him purchasing the jacket with the RuPay card and urged everyone to keep buying khadi. He also said it is a "great tribute" to Mahatma Gandhi.

At the Ahmedabad Shopping Festival I too could not resist from shopping! Purchased some Khadi products using the RuPay card.

I urge you all- keep buying Khadi and contribute to the empowerment of lakhs of weavers associated with the industry. It is also a great tribute to Bapu! pic.twitter.com/DVTAIwFJz2

The Ahmedabad Shopping Festival is being organised simultaneously with the Vibrant Gujarat Summit, to be held in Gandhinagar from January 18 to 20. The shopping festival will provide city enterprises with a platform to showcase their products. It's the first-ever event of its kind in India.