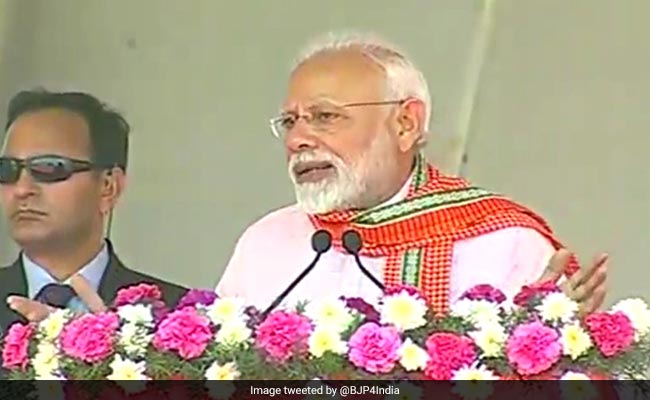 PM Modi said in Thrisuur that "they targeted an honest scientist to settle scores".

Over two decades ago, former Indian Space Research Organisation (ISRO) scientist S Nambi Narayanan was arrested over espionage charges only to be cleared by the CBI. He fought a long, bitter battle to restore his honour and seek action against Kerala police officers who he says ruined his life.

On the eve of the 70th Republic Day, his name featured on the list of 112 personalities selected for the Padma awards.

Prime Minister Narendra Modi said "it was an honour for his government to confer the Padma Bhushan on Nambi Narayanan".

"We value each and every person who is working towards making India stronger," the Prime Minister said during his rally in Kerala's Thrissur today.

Ahead of the national election due in four months, PM Modi hit out at the Congress, saying "they targeted an honest scientist to settle scores".

"More than two decades ago, a hardworking and patriotic ISRO scientist, Nambi Narayanan was implicated in a false case, just because a few UDF leaders were settling political scores. Imagine, for their own politics, they damaged national interest, troubled a scientist," PM Modi said.

The UDF or United Democratic Front is a Congress-led alliance in Kerala.

Drawing a parallel between the ruling BJP and the Congress, PM Modi alleged that they "abused science", whereas for his government "science is a matter of national pride".

On Saturday, Nambi Narayanan said he was glad that his work in the Indian space arena was finally recognised.

"My name became famous because of 'spying' charges. Now I am glad that my contribution has been recognised by the government," he said on the Padma Bhushan that he will receive from President Ram Nath Kovind in a few months.

The former ISRO scientist who had alleged mental cruelty and torture by the Kerala police after his arrest in 1994 in a spy scandal was awarded Rs 50 lakh compensation by the Supreme Court in September last year.

The top court observed that Nambi Narayanan was "arrested unnecessarily, harassed and subjected to mental cruelty" and asked a former Supreme Court judge to investigate his allegations against Kerala police officers.

The scientist, now 77, was in charge of the cryogenics division when he was charged with spying and arrested. The CBI, which took over the probe from the Kerala Police in 1996, said the case against Nambi Narayanan was baseless, and closed it. The CBI report also listed several lapses committed by the police officers and recommended action against them.

Mr Narayanan then approached the Supreme Court challenging the Kerala High Court order backing the Kerala government's decision not to take action against former DGP Siby Mathews and two retired superintendents of police KK Joshua and S Vijayan, who were later held responsible by the CBI for his illegal arrest.