"This Was Trailer, Film Abhi Baaki Hai": PM Modi On His Government's 100 Days

The Congress, however, alleges that the BJP government's 100 days in power were marked by "tyranny, chaos and anarchy". 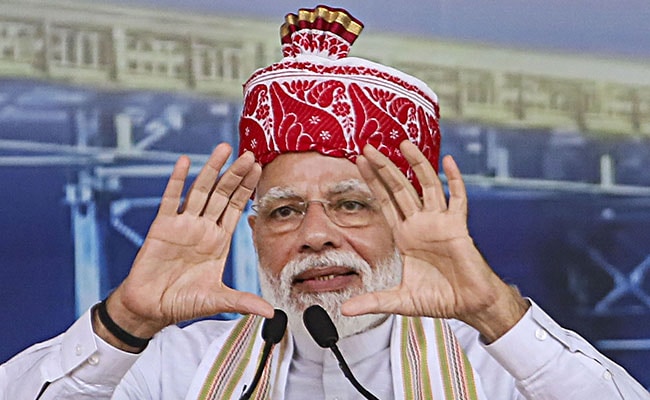 Prime Minister Narendra Modi today borrowed a quote from a Shah Rukh Khan-starrer to claim that his cabinet's achievements in its first 100 days in governance were just a "trailer", and the complete picture would emerge in the years to come. "Before the elections, I had promised to create a strong and work-oriented government -- a government that will work at a speed that's even faster than the earlier one, a government that will strive to make all your aspirations come true. Our 100 days in governance was just a trailer, the entire movie is yet to come," he said at an election rally in Jharkhand's Ranchi.

PM Modi claimed that his government was committed to ensuring all-round progress of the country as well as punishing those "looting" it. "Development is our promise and intention too. The country has never seen such rapid pace of development before," he said. "At the same time, a massive crackdown on corruption has begun. The people who try to loot the public will be put in their place."

The Narendra Modi government had launched its second term with a roar, pushing a number of controversial legislations such as the Triple Talaq Bill and the Right to Information (Amendment) Bill through parliament within a span of weeks. On August 5, it also scrapped the special status accorded to Jammu and Kashmir under Article 370 and bifurcated it into two distinct union territories. The monsoon parliamentary session held under the new government was regarded as one of the most productive over the last few decades.

PM Modi had made similar claims at a BJP rally in Haryana's Rohtak on Sunday. "The 130 crore people of this country were the inspiration behind whatever big decisions were taken in the past 100 days. Poor people remain the BJP's first priority, whether it is ruling at the state or central level. We don't think in a fragmented manner, but instead focus on the larger goal of taking our country forward," he had said, adding that the country was heading towards "development, trust and a big change".

The opposition Congress, however, viewed the BJP's action during the 100-day period in a different light. "The first 100 days of BJP 2.0 can be described in three words: tyranny, chaos and anarchy," the party said, referring to the slowdown in the industrial sector and the manner in which the country's growth had dropped to 5 per cent in the quarter ended June 30, 2018. "Eight sectors have recorded a growth rate below 2 per cent and our Union Finance Minister still refuses to accept that our economy is in free fall. If the BJP continues on this path of negligence and deceit, we are headed towards recession."

Even former Prime Minister Manmohan Singh, a renowned economist himself, had asked the central government to change its way of functioning earlier this month. "India cannot afford to continue down this path. Therefore, I urge the government to put aside vendetta politics, and reach out to all sane voices and thinking minds, to steer our economy out of this man-made crisis," he said.

By vendetta politics, Dr Singh was referring to the arrest of prominent Congress leaders P Chidambaram and DK Shivakumar by the Enforcement Directorate on money-laundering charges over the last few weeks. The Congress has accused the Narendra Modi government of using probe agencies such as the Enforcement Directorate and the CBI to target opposition leaders that it views as a threat to its political machinations.

Besides this, the opposition has accused the central government of steamrolling contentious legislations through Parliament without taking all stakeholders into account. Its handling of the Jammu and Kashmir situation has also been criticised by rights groups and opposition politicians.