As PM Modi Begins New Term, Why Tamil Nadu Has No Representative

Many say AIADMK missed the bus because of the tussle between Chief Minister E Palaniswamiand his deputy O Panneerselvam. The BJP didn't win a single seat in the state. 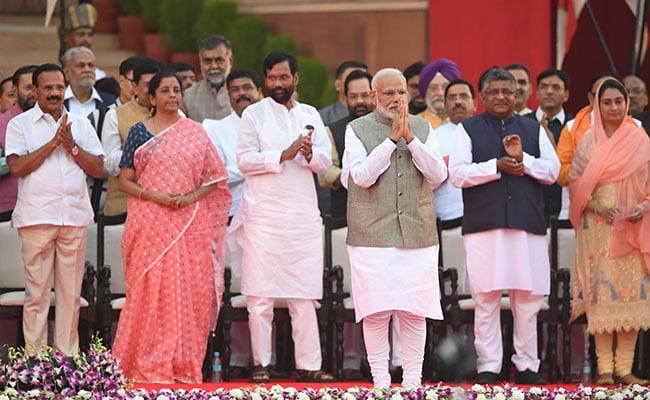 PM Modi took oath for his second term in a grand ceremony in Delhi today. (Reuters)

Prime Minister Narendra Modi's 58-member Council of Ministers has no representative from its Tamil Nadu ally AIADMK, which won one seat in the Lok Sabha polls. Many say the party missed the bus because of the tussle between Chief Minister E Palaniswamiand and his deputy O Panneerselvam. The BJP didn't win a single seat in the state.

Sources say even before the election results, OPS had been lobbying for a ministerial berth for his son.

Reports suggest a section of the AIADMK, mainly from the Chief Minister's camp, proposed the name of R Vaithilingam, a Rajya Sabha member, three-time legislator and a former minister in J Jayalalithaa's cabinet.  He was also a confidant of Jayalalithaa, who died in December 2016.

Both the AIADMK hopefuls reportedly stayed put in Delhi, waiting for a phone call.

Till Thursday night, a senior AIADMK leader had said: "Vaithilingam will join the government though the party is also lobbying for Raveendranath."

Raveendranath denied reports that he had received a call to join the Prime Minister's team, saying: "I'm expecting a call". Mr Vaithilingam also denied any call but said: "I'm not expecting the call".

A BJP leader told NDTV: "It's the PM's prerogative. We hope Vaithilingam is given a berth as we don't want the party face any revolt. We understand he is acceptable to all".

In another display of a party in disarray, another AIADMK leader said: "If the party is serious about rewarding a senior leader we have competent leaders like Rajya Sabha MP Dr Maitreyan. This will only bring a bad name to the party".

The feud between the Tamil Nadu government's top two began after the death of Jayalalithaa. Though Jayalalithaa loyalist OPS took over as Chief Minister, her long-time aide VK Sasikala replaced him with Mr Palanisamy. OPS rebelled and voted against the Palanisamy or EPS government in the trust vote. Both leaders patched up after ousting Sasikala's family from the party.

On the ground sources say EPS has reinforced his hold over the party by winning nine of the 22 assembly seats where bypolls were held.

Over the last one year both leaders tried to outdo each other in cosying up to the BJP and even going for an alliance with the party in a shift from Jayalalithaa's position.

The BJP's other allies like the Akali Dal and Shiv Sena have been accommodated in the government. Bihar ally Nitish Kumar refused to join the government because he had asked for two cabinet berths but was offered just one.