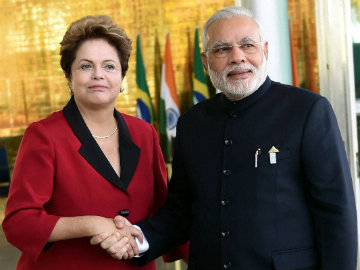 Prime Minister Narendra Modi and President of Brazil, Dilma Rousseff shake hands at the Presidential Palace in Brasilia on Wednesday.

Brasilia, Brazil: Giving a boost to bilateral ties, India and Brazil on Wednesday decided to expand trade and investment flows while deepening collaboration in the fields of renewable energy, defence and cyber security as they signed three pacts including one on cooperation in the environment sector.

The decisions were taken during the first bilateral meeting between Prime Minister Narendra Modi and Brazilian President Dilma Rousseff in Brasilia.

In a special gesture, the host rolled out the red carpet and received Prime Minister Modi, who is not here primarily on a bilateral visit, with full military honours at the Presidential Palace before their meeting over breakfast.

As leaders of G4 countries, Mr Modi and Ms Rousseff called for urgent progress on reforms of the United Nations, including the Security Council, by the time of the 70th anniversary of the UN in 2015.

The G4 nations comprising Brazil, Germany, India, and Japan are four countries which support each other's bids for permanent seats on the United Nations Security Council.

Mr Modi and Ms Rousseff also agreed to intensify their cooperation in international forums and multilateral institutions including the G20.

The External Affairs Ministry in a statement said the two leaders agreed to take steps to further expand and diversify trade and investment flows and deepen cooperation in agriculture and dairy science, convention and renewable energy, space research and application, defence, cyber security and environment conservation.

Bilateral trade between India and Brazil stood at USD 9.4 billion last year with balance of trade in favour of India.

There have been two-way investments between the two countries and total FDI by Indian companies in Brazil from 2007 to 2013 was USD 0.1 billion.

The three agreements signed in the presence of PM Modi and President Rousseff related to cooperation in the field of environment, space and in the establishment of a consultation mechanism on mobility and consular issues.

The agreement on space was made for implementing arrangement establishing cooperation in augmentation of a Brazilian earth station for receiving and processing data from Indian Remote Sensing (IRS) Satellites.

Mr Modi congratulated Ms Rousseff and the people of Brazil for the excellent conduct of the FIFA World Cup as well as  the successful organisation of the BRICS Summit besides arranging a meeting of BRICS leaders with their counterparts from South America in Brasilia.

Promoted
Listen to the latest songs, only on JioSaavn.com
He described the sixth BRICS Summit as a historic one which had produced two important agreements over the New Development Bank and the Contingency Reserve Arrangement and lauded the host for her guidance during the summit.