PM Modi concluded his visit with prayers at the 200-year-old Shreenathji Temple in Manama, the oldest temple in the region. 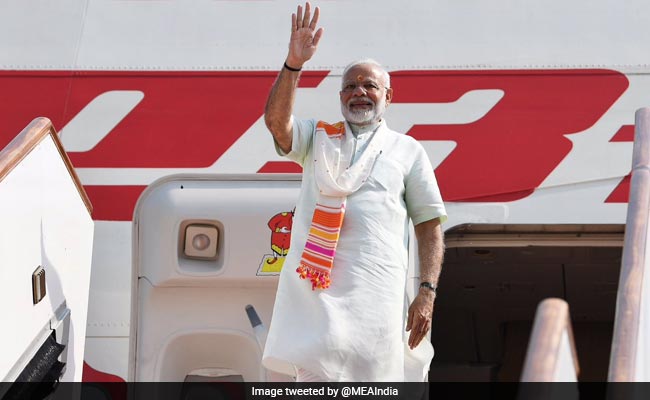 PM Modi, who was in Bahrain, left for France earlier today.

Prime Minister Narendra Modi arrived in France on Sunday to attend the G7 Summit where he will speak on burning global issues of environment, climate and digital transformation and also meet world leaders.

"The Prime Minister reached Biarritz in France, where he will take part in G-7 Summit. In addition to the multilateral components of the Summit, he would also be meeting world leaders in separate bilateral interactions," the Prime Minister's Office tweeted.

PM Modi, who was in Bahrain on the third leg of his three-nation tour to France, the UAE and Bahrain, concluded his visit with prayers at the 200-year-old Shreenathji Temple in Manama, the oldest temple in the region.

After the first ever visit by an Indian Prime Minister to Bahrain, as a special gesture PM @narendramodi is seen off by Deputy PMs HH Mohammed bin Mubarak and HH Khalid bin Abdullah as he emplanes for Biarritz, France to participate in #G7Summit as Biarritz Partner. pic.twitter.com/4dRsV35ADY

During the G7 Summit, which will be held in the picturesque seaside French town of Biarritz, the Prime Minister will address sessions on environment, climate, oceans and digital transformation. Though India is not a member of the G-7 grouping, PM Modi has been personally invited by the French President Emmanuel Macron. The Ministry of External Affairs (MEA) had said that the invitation was a "reflection of the personal chemistry" between the two leaders and also "recognition of India as a major economic power".

The countries which are part of the G7 include the UK, Canada, France, Germany, Italy, Japan, and the US. On the sidelines of the G7 Summit, PM Modi and US President Donald Trump are likely to discuss the situation in Kashmir, trade issues and other topics of mutual interest.

PM Modi is also expected to meet the new British Prime Minister Boris Johnson. The two leaders spoke on phone earlier this week and agreed on the importance of working together to further strenghten the bilateral partnership, particularly through trade and economic relations.