With 100 per cent funding from the Centre of Rs 12,652 crore for a period of five years till 2024, NADCP aims at vaccinating over 500 million livestock. With 100 per cent funding from the Centre of Rs 12,652 crore for a period of five years till 2024, NADCP aims at vaccinating over 500 million livestock, including cattle, buffalo, sheep, goats and pigs against foot and mouth disease.

The programme also aims at vaccinating 36 million female bovine calves annually in its fight against Brucellosis disease. The programme has two components - to control the diseases by 2025 and eradication by 2030. 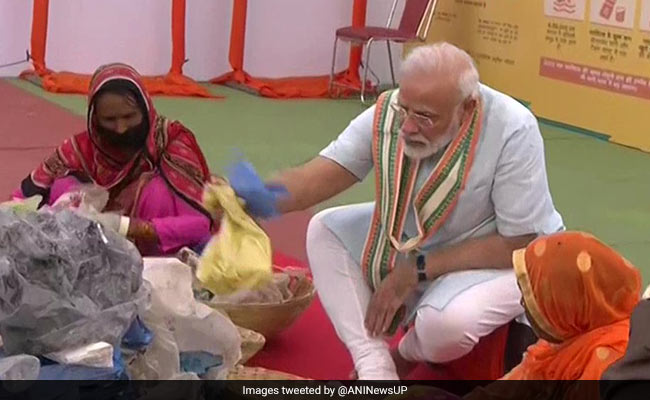 PM Modi talks about the importance of segregating plastic from waste

PM Modi also personally interacted with farmers, veterinary doctors and plastic waste segregators. Taking his pledge to phase out single-use plastic, he not only launched a welfare scheme to segregate plastic from waste but also interacted with a number of waste collectors.

He in fact sat down with them to tell them the importance of segregating plastic from waste so that it doesn't end up in the stomachs of bovines.

He inspected a machine facility that will recycle waste. He also interacted with veterinary doctors on how vaccines are administered to cows and what precautions are taken.

This is part of the government's effort to double farmers' income. Pm Modi also interacted with select farmers, who have been beneficiaries of government schemes.

The Prime Minister also launched nationwide workshops in Krishi Vigyan Kendras in all 687 districts of the country with artificial insemination of livestock as one of the goals.