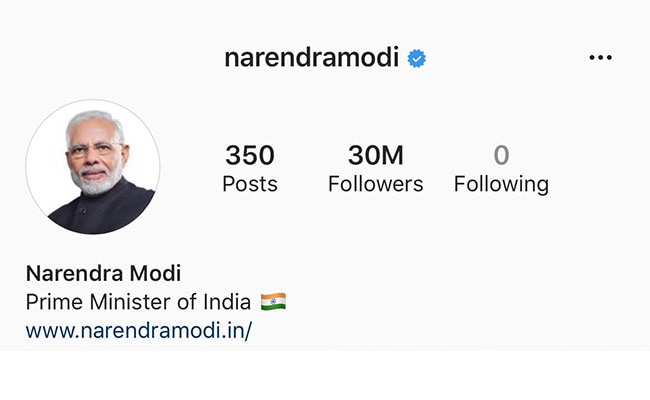 "PM @NarendraModi crosses 30 million followers on Instagram. He is the most followed world leader on Instagram ahead of US President Trump as well as former US President Obama. This is yet another testament to his popularity and connect with the youth," he tweeted, sharing a screenshot of PM Modi's follower count.

PM Modi, known for being social media savvy, often shares photos from the events he participates in. Some of the most popular images he has shared on Instagram are from the informal meeting with Chinese President Xi Jinping at Tamil Nadu's Mamallapuram this week, his presence at the sold-out "Howdy, Modi!" event in Texas in September, and a candid shot of him playing with the eight-month-old granddaughter of BJP MP Satyanarayan Jatiya.

A very special friend came to meet me in Parliament today.

On micro-blogging site Twitter, PM Modi remains immensely popular as well, with close to 50 million followers. Congress MP Shashi Tharoor, on his official website, claimed that till 2013, he was India's most-followed politician on Twitter, until being overtaken that year by PM Modi.