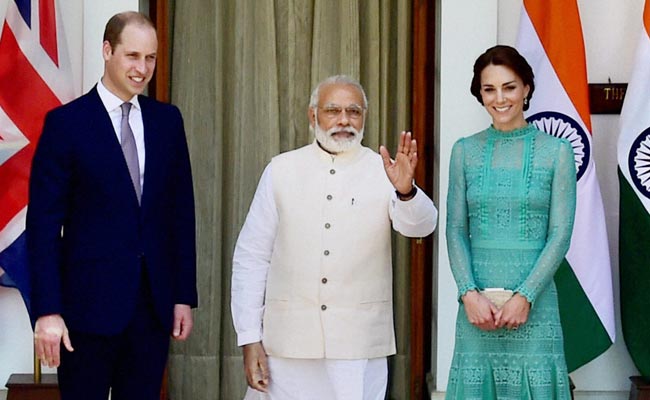 Before going indoors, Prince William and his wife were seen strolling on either side of PM Modi, chatting and smiling, before posing for cameras. Kate wore a full-sleeved gauze green dress, while William donned a blue suit.

A royal summer in Delhi! PM @narendramodi receives the Duke and Duchess of Cambridge at Hyderabad House pic.twitter.com/tyu2J5sOfA

During his visit to Britain in November last year, Queen Elizabeth II had hosted PM Modi to a lunch banquet.

The Royal couple came to New Delhi from Mumbai on Wednesday afternoon, where they laid a wreath at the Amar Jawan Jyoti memorial to honor soldiers who had died in World War I. They also paid respects to Mahatma Gandhi, at the Gandhi Smriti.

In the evening, William and Kate attended a garden party to celebrate Queen Elizabeth's 90th birthday, which is on April 21.

From Delhi, the Royal couple will travel to the Kaziranga National Park, home to two-thirds of the world's Indian one-horned rhinos.

William and Kate are traveling without their two children - 2 1/2-year-old Prince George and 11-month-old Princess Charlotte. They had taken George to Australia with them in 2014 on their last royal tour.

William and Kate will then head back to India, where they'll wind up their tour with a visit to the Taj Mahal, retracing the steps of a 1992 visit to the monument of love by William's mother, the late Princess Diana.