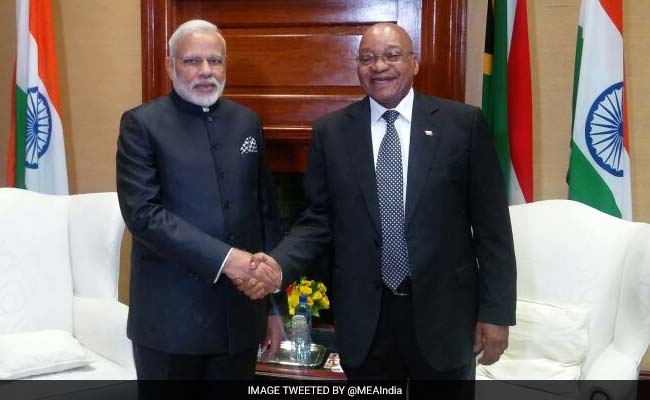 PM Modi said the two countries could also partner in the field of defence and security.

"I am convinced that industry-to-industry ties not only can bring rich economic gains to our societies, they can give a new shape to our partnership, and drive it to new levels," PM Modi said in a joint press statement with Jacob Zuma following delegation-level talks between the two sides.

"And, in the process, also help both our nations to play a more robust regional and global role," he stated.

PM Modi said that in the last two decades, the relationship between the two countries has been a story of strong advances and concrete achievements.

"Two-way trade has grown by over 300 per cent in the last 10 years. Indian companies hold strong business interests in South Africa," he said.

The Prime Minister said that one-fourth of India's investments in Africa were in South Africa.

"And there is potential to expand our business and investment ties further, especially in the areas of mineral and mining, chemicals and pharmaceuticals, high technology manufacturing and information and communication technology," he said.

PM Modi said that given the nature of the two countries' developing economies, both should also focus on improving human capital.

The Prime Minister said the two countries could also partner in the field of defence and security.

"Both, at the level of industry and for our strategic and security needs. In India, this is one of the sectors witnessing a complete transformation," he said.

PM Modi said, during Friday's talks he and Zuma agreed on the need to work more closely on international issues and emerging global challenges.

"I thanked the President for South Africa's support to India's membership of the Nuclear Suppliers Group," he said.

"We know that we can count on the active support of our friends, like South Africa," he stated, adding that climate change was another issue of shared concern.

He said that both sides agreed to "cooperate actively to combat terrorism, both in our region and in the world".

He welcomed South Africa's chairmanship of the Indian Ocean Rim Association and said that it has emerged as a key platform of engagement for the maritime neighbours connected by the Indian Ocean.

On a personal note, PM Modi said the visit has given him the opportunity to pay homage to the two great souls, Mahatma Gandhi and Nelson Mandela.

In his remarks, President Zuma said that over 100 Indian companies were operating in South Africa and these were playing a "significant role" in the country's economy and job creation.

"We are looking to diversify South Africa's exports to India," he said.

According to him, water management, pharmaceuticals and infrastructure development are areas that hold potential in the future.

Following Friday's talks, both sides signed three memorandums of understanding - on information and communication technology, tourism, and grass root innovation in the science and technology - and a programme of cooperation in arts and culture.

The Prime Minister will then visit the Constitution Hill and the Nelson Mandela Foundation in Johannesburg.

In the evening, he will address an Indian diaspora rally in Johannesburg before departing for Durban where his engagements are scheduled for Saturday.

PM Modi arrived in South Africa from Mozambique on Thursday night on the second leg of his four-nation tour of Africa.

This is his first visit to mainland Africa and is also the first prime ministerial visit from India to South Africa since the then Prime Minister Manmohan Singh arrived in 2013 for the G20 summit in Durban.