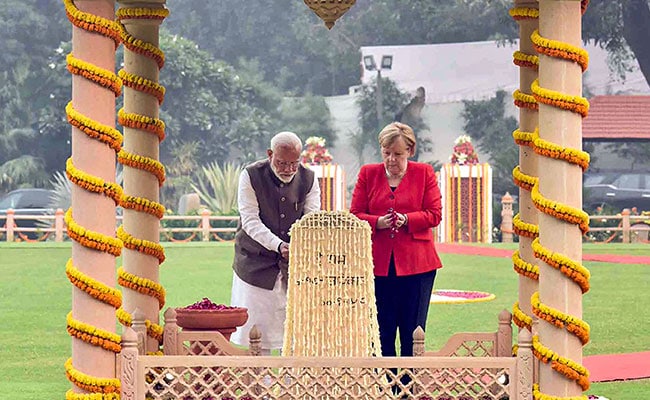 The Prime Minister received the German Chancellor in front of the statue of Mahatma Gandhi sculpted by renowned artist Ram Sutar.

Explaining the significance of the place, PM Modi informed Angela Merkel that the memorial is located at the site where Mahatma Gandhi spent the last few months of his life and was assassinated on January 30, 1948.

"Took Chancellor Merkel to Gandhi Smriti in Delhi. The thoughts and principles of Mahatma Gandhi reverberate in Germany and inspire its citizens," the Prime Minister tweeted.

He also posted pictures of the visit.

The two then visited the museum and saw sketches and paintings made by renowned artist Upendra Maharathi and Indo-Hungarian painter Elizabeth Brunner, a student of Nandalal Bose of Santiniketan.

They walked through a digital gallery curated by Birad Rajaram Yajnik, based on the twin themes of ''ahimsa'' (non-violence) and ''satyagraha'' (passive political resistance).

The leaders later visited various digital installations in the museum, including the audio testimonial to Mahatma Gandhi by Albert Einstein and the interactive kiosk displaying the rendition of the song ''Vaishnava Jana To'', sung in 107 countries.

Prime Minister Modi and Chancellor Merkel then paid homage to Mahatma Gandhi at the Martyr's Column and offered floral tributes, a statement later issued by the Prime Minister's Office said.

Earlier in the day, Angela Merkel referred to Mahatma Gandhi in a joint statement with PM Modi.

"Mahatma Gandhi was born 150 years ago. I was able to lay wreath this morning...His peaceful revolution inspired so many people all across the globe. The fact that I am standing before you today is linked to the fact that on 9th of November 30 years ago, a wall came down in Berlin...after a peaceful process and that shows us the traditions that Germans and Indians can be proud of," she said.