Uma Bharti, whohad taken the Sanyasa Deeksha from the seer in 1992, called Vishwesha Teertha Swami a "rarest of rare" saint, revered by people from across sections of the society. 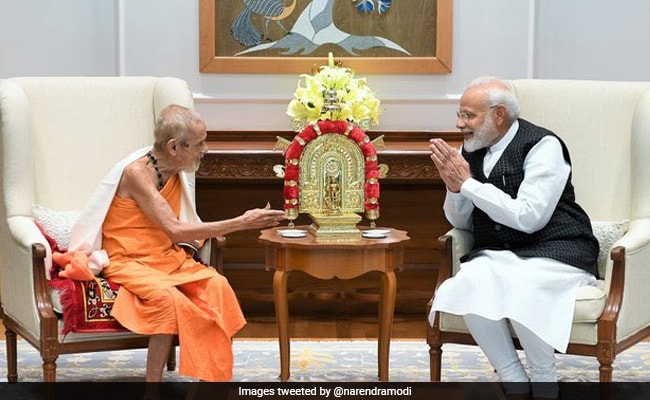 PM Modi remembered Swami Vishwesha Teertha as a "powerhouse of service and spirituality".

Swami Vishwesha Teertha was a "powerhouse of service and spirituality" who will remain in the hearts and minds of lakhs of people for whom he was always a guiding light, Prime Minister Narendra Modi said as he remembered the chief of Pejavara Mutt who died this morning after battling an illness. Swami Vishwesha Teertha was the 33rd head of the Pejawar mutt which is one among the "Ashta" Mutts of Udupi in Karnataka.

"Sri Vishvesha Teertha Swamiji of the Sri Pejawara Matha, Udupi will remain in the hearts and minds of lakhs of people for whom he was always a guiding light. A powerhouse of service and spirituality, he continuously worked for a more just and compassionate society. Om Shanti," Prime Minister Narendra Modi tweeted, sharing his pictures with the 88-year-old pontiff.

I consider myself blessed to have got many opportunities to learn from Sri Vishvesha Teertha Swamiji. Our recent meeting, on the pious day of Guru Purnima was also a memorable one. His impeccable knowledge always stood out. My thoughts are with his countless followers. pic.twitter.com/sJMxIfIUSS

Calling Swami Vishwesha Teertha's death as an irreparable loss to the spiritual world, Home Minister Amit Shah said swamiji's selfless contribution towards the welfare of people and society has no parallels.

"Deeply pained to learn about the demise of Sri Sri Vishwesha Teertha Swami ji of the Pejawar mutt, Udupi. He was an epitome of humanity, kindness and knowledge. His selfless contribution towards the welfare of people and society has no parallels," he tweeted.

Sri Vishwesha Teertha Swamiji was an endless source of positivity. His teachings and thoughts will always continue to guide us. I was fortunate to have received his blessings. His passing away is an irreparable loss to the spiritual world. Condolences to his followers. Om Shanti. pic.twitter.com/TIJbVaFcUT

I am deeply saddened to learn about the demise of Vishwesha Theertha Swami, the revered seer of Udupi's Pejawar Mutt, in Udupi today.

He made history by being the only seer among the seers of the Ashta mutts of Udupi to have performed five biennial Paryayas. pic.twitter.com/b4IYAgE10K

Former Union Minister Uma Bharti was among those who came to the Udupi Sri Krishna Mutt this morning. Ms Bharti, who had taken the Sanyasa Deeksha from the seer in 1992, called him a "rarest of rare" saint, revered by people from across sections of the society. "My guru is a karma yogi and he taught all of us to become karma yogis," she said, news agency PTI reported.

"I am deeply saddened by the passing away of Sri Vishwesha Teertha Swamiji of the Sri Pejavar Matha. Pejavar Swamiji was a highly admired and respected spiritual leader who relentlessly worked towards the service and welfare of humanity," he said in a statement.

Karnataka Chief Minister BS Yediyurappa, who was touring the coastal region, was among the state leaders who expressed grief over the pontiff's death. "May Lord Krishna grant salvation to his soul. I would pray for the devotees to give them the strength to overcome their pain".

Siddaramaiah, the Leader of Opposition in the Karnataka Assembly, tweeted:

Sri Vishvesha Teertha Swamiji of the Sri Pejawara Matha won the hearts of many people through his philosophical thoughts & honest speaking.

His demise has saddened me & I offer my condolences to all his well-wishers & followers. pic.twitter.com/N9JKnG1b61

The Karnataka government has announced a three-day state mourning. His last rites will be performed at the Vidyapeetha, founded by him, Mr Yediyurappa said..