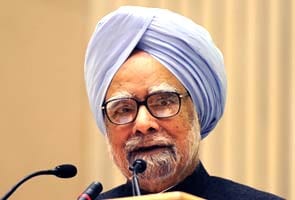 New Delhi: For the first time after his government was reduced to a minority, Prime Minister Manmohan Singh hosted a dinner for Mulayam Singh Yadav and his son Akhilesh, who along with Mayawati provide external support to the UPA and are crucial for its survival. Parliamentary Affairs Minister Kamal Nath and National Conference leader Farooq Abdullah were also present at the dinner.

The winter session of Parliament begins on November 22. Mamata Banerjee's Trinamool Congress, which dropped out the UPA in September over its decision to introduce a series of economic reforms, says it hopes to move a no-confidence motion against the government.

Ms Banerjee says that the Prime Minister incorrectly cleared reforms including the opening up of the retail sector to international chains like Wal-Mart after his government had been thrust into a minority because of her exit. Mr Banerjee says the government did not have the moral authority to make those changes after it lost its majority.

Mulayam Singh Yadav's Samajwadi Party has openly opposed foreign direct investment or FDI in retail but maintained it is not withdrawing its support to UPA government in order to check communal forces.

Sources said the presence of Akhilesh Yadav in tonight's dinner assumes significance as his government seeks to get central assistance for various schemes in Uttar Pradesh.

The Parliament session will also see the opposition BJP attacking the government over a burst of corruption charges. However, the BJP's position is somewhat undermined by the inquiry launched just weeks ago against its president, Nitin Gadkari, whose business empire was allegedly propped up by investor firms.

On Sunday, the different members of the ruling UPA coalition will gather at the PM's home in Delhi. The Prime Minister will be discussing how UPA and allies can unitedly face the opposition during the winter session of Parliament. The Congress' allies have repeatedly said that they are not consulted in important decisions; in response to that complaint, a coordination committee was created recently.