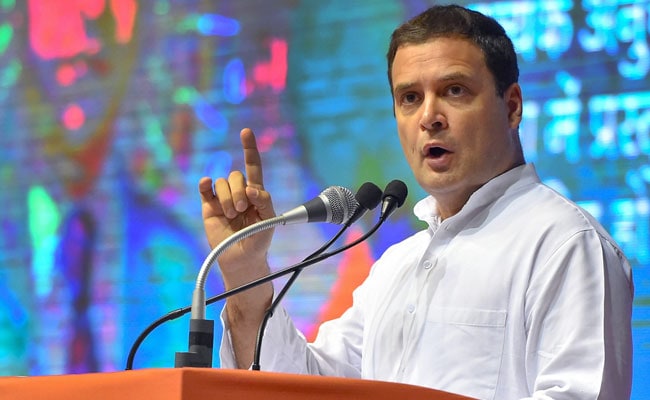 Rahul Gandhi has termed the latest developments in the CBI case as a "crime thriller".

Rahul Gandhi has likened the CBI vs CBI drama being played out in Delhi to a "crime thriller". He has also given it a title -- "Chowkidar Hi Chor". In a tweet this morning, the Congress president said that in its latest episode, a senior officer of the agency has made serious allegations against a union minister, the National Security Adviser (NSA), law secretary and cabinet secretary.

Without taking any names, Mr Gandhi attacked "his partner from Gujarat for making crores". "The officers are tired. Trust is broken. Democracy is crying," he added.

An Indian Police Service (IPS) officer, Manish Kumar Sinha, who was probing corruption allegations against CBI's Special Director Rakesh Asthana, approached the Supreme Court on Monday against his transfer to Nagpur and demanded thorough investigation into the case.

Mr Sinha made alarming allegations against Mr Asthana and top government functionaries such as the law secretary, National Security Adviser Ajit Doval and a Minister of State.

He claimed that a union minister of State took "a few crores" as bribe to intervene on behalf of the businessman who allegedly handed out the bribes.

Mr Sinha alleged that his transfer to Nagpur on October 24 was "arbitrary, motivated and malafide". His investigation was leading towards certain influential people and therefore, he was transferred "solely with the purpose and intent to victimise the officer", he told the court.

CBI director Alok Verma has been accused by his deputy Rakesh Asthana of taking bribe from a Hyderabad-based businessman being investigated by the agency in a money laundering case involving meat exporter Moin Qureshi. Mr Asthana then claimed that it was in fact his boss who accepted bribe from the same businessman.

After escalation of the infighting in the CBI, the top two officers were sent on forced leave and several senior officers probing corruption allegations against Mr Asthana were transferred.

The Congress chief has been relentlessly attacking Prime Minister Narendra Modi using the term "chowkidar" or watchman ever since he asked voters to appoint him as a "chowkidar" entrusted with protecting the national treasury at a rally in 2013. Mr Gandhi said that PM Modi projected himself as a "chowkidar", but never specified as to whom he was serving.

While criticising the Prime Minister's silence on the Rafale deal, Mr Gandhi claimed that it is often heard on the streets that the "country's chowkidar is a thief". "Galli galli me shor hai, Hindustan ka chowkidar chor hai (This is the cry in every lane, India's watchman is a thief)".

"I think that the desperation of the clown prince, as Arun Jaitley calls him, is to attract attention to himself at the cost of the prime minister's name," she said.