Piyush Goyal said announcement about the coach factory at Rae Bareli was made in 2008 but not a single coach was made till 2014. 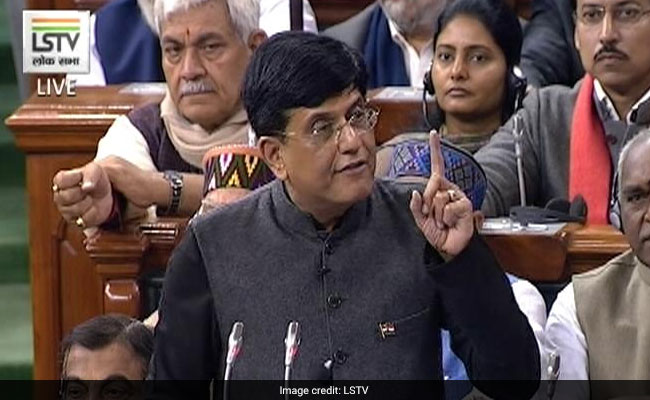 Railway Minister Piyush Goyal today hit back at the Congress over the issue of corporatisation of the Rae Bareli rail coach factory, saying the party only made announcements and not a single coach was made till 2014.

A day after UPA Chairperson Sonia Gandhi opposed corporatisation of the rail coach factory, Congress leader in the Lok Sabha Adhir Ranjan Chowdhury raised the issue during the Question Hour.

Mr Goyal said double standards of the Congress were on display in the House yesterday and today.

Mr Goyal said announcement about the coach factory at Rae Bareli was made in 2008 but not a single coach was made till 2014. As many as 1,422 coaches were made at the factory last year, Mr Goyal said.

He also cited that then finance minister in his 2004-05 Budget speech had mentioned that disinvestment and privatisation are useful economic tools.

Mr Goyal also said that Congress was looking at privatisation and not corporatisation.

Congress members were seen protesting against remarks of the minister.

On Tuesday, Ms Gandhi said the government has decided to corporatise six railway production units and the Modern Coach Factory is one of them.

"Those who don't understand the real meaning of corporatisation....It is actually the first step towards privatisation. They are selling the country's assets to handful private players at a throwaway price. This will leave thousands unemployed," she had said.

During the Question Hour, DMK leader Kanimozhi mentioned the government's decision to close down five printing presses under railways.

Mr Goyal gave an assurance that there would not be any job losses and said these printing presses set up by the British have become totally uneconomical.

Now, some tickets cost more to print and there could be a situation where the government could be forced to hike passenger fares, the minister said eliciting protests from

Opposition members, including the DMK. "Not a single person will lose job... (but) we will not allow inefficiency in railways," he noted.

Mr Goyal also took a dig at the Opposition, saying while the world is moving towards digitalisation, some parties and alliances are living in history.