Kerala Chief Minister Pinaryai Vijayan wrote to counterparts in 11 non-BJP ruled states today, urging them to unite in their opposition to the controversial citizenship law. In his letter Mr Vijayan spoke of "apprehensions (that) have arisen among large sections of our society" over the amendments to the Citizenship Act of 1955 and said "people from cross-sections of society... need to stand united in preserving basic tenets of our polity which form cornerstone of Indian democracy".

Copies of the letter have been sent to the Chief Ministers of Maharashtra, Bengal, Bihar, Jharkhand and several Congress-ruled states, among others.

"We are sure that our unity in diversity, which has stood the test of times, will ultimately emerge stronger. People from various cross-sections of society, irrespective of any difference they might have, need to stand united in preserving basic tenets of our polity, which form the cornerstone of Indian democracy," the letter said.

"Kerala has decided to address the apprehensions about NRC and that preparation of NPR will lead to NRC by staying all activities relating to NPR in the state," the letter said. 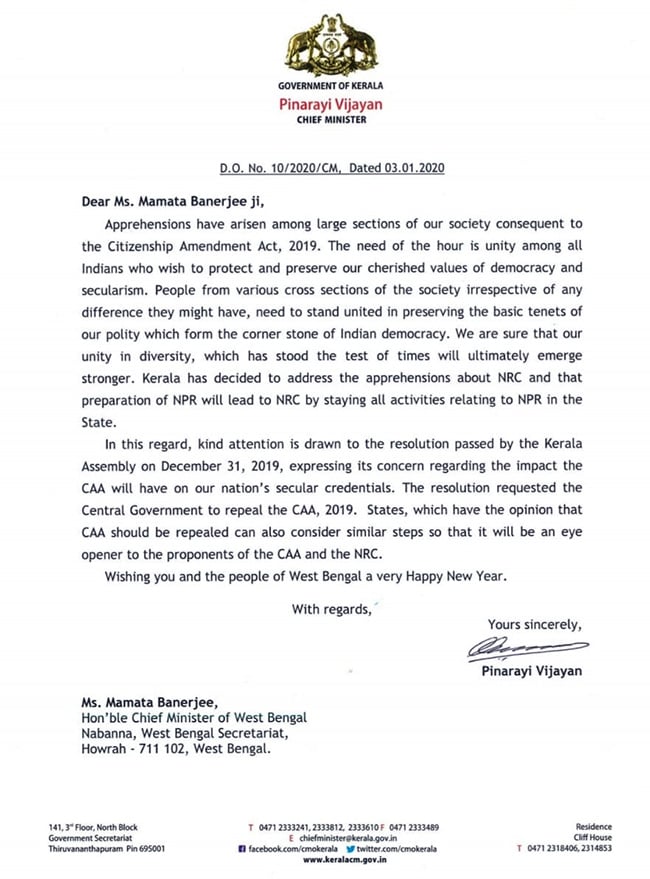 Captain Amarinder Singh, Chief Minister of Congress-ruled Punjab, to whom a copy of the letter has been sent, has come out strongly in support of the resolution. In an open letter to Union Law Minister Ravi Shankar Prasad, he expressed concern over remarks in which Mr Prasad had "discounted position being taken by some states against CAA" and "called upon such politicians to seek appropriate legal advice before taking such a stand."

"I'm neither naive nor misguided and it is my duty to represent the voice of my people... centre must pay heed to same. As law minister you know the CAA fails test of Constitution," he wrote.

As the leader of the state, I took my oath under the Constitution @rsprasad Ji. I'm neither naive nor misguided & it's my duty to represent the voice of my people & Centre must pay heed to same. As the law minister, you'd know that #CAA fails the test of the Constitution. 1/2 pic.twitter.com/QKa68CDGi4

In December the Kerala government had ordered a stay on all NPR and NPR-related activities over public "apprehensions" it could lead to NRC in the wake of the controversial citizenship act.

Mr Vijayan's letter comes two days after Kerala became the first state to pass a resolution against the CAA. On Wednesday, while moving the resolution in the Assembly, the Chief Minister pointed to massive widespread protests against the law from all sections of society, including students.

"Our Constitution is a milestone in the fight towards citizen rights and a society based on equality. Also our constitution is based on democracy, secularism, equality and scientific temper. This Act subverts the very Constitution," he said at the time.

Last month Bengal Chief Minister Mamata Banerjee, whose Trinamool Congress is locked in a fierce battle with the BJP as the state heads for Assembly polls next year, wrote a similar letter. In it, Ms Banerjee asked opposition leaders to unite and say "no" to the citizenship law.

Violent protests have broken out across the country over the CAA, claiming dozens of lives - some in police firing. Lakhs have taken to the streets in sustained agitations.

The CAA makes religion the test of citizenship for the first time. The government says it will enable non-Muslim refugees from three Muslim-dominated neighbours to become Indian citizens. Critics say it discriminates against Muslims and violates secular principles of the Constitution.