The Chief Justice of India, SA Bobde, is said to be fond of bikes and has talked about owning a bullet in the past. 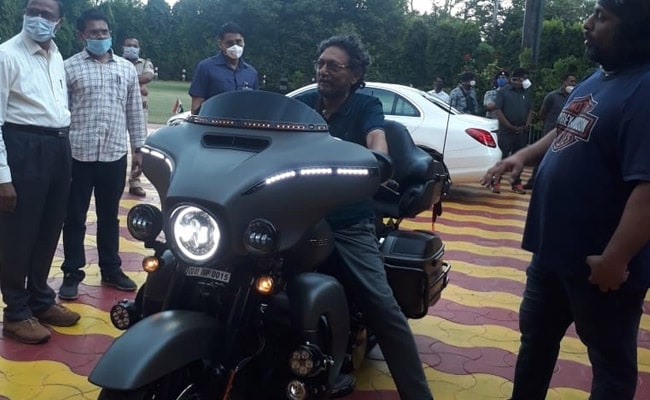 The Chief Justice of India, SA Bobde on a Harley Davidson bike.

The photo was taken in the Chief Justice's hometown Nagpur, where he is currently.

I like ppl who love life. No false pretensions. No false sense of protocol. Lutyens delhi full of such ppl. Just saw this pic on social media of our current CJI Sharad Bobde. A different person. Positions come & go. But you hv 1 life. pic.twitter.com/EFEr23KdP0

Liked this Avatar of our Chief Justice Sri Bobde .. Stylish and suave.. #rockstarpic.twitter.com/Oh7KyWv2JG

Our Chief Justice, Sharad Bobde, I'd read, is a keen dog-lover and photography enthusiast.

Adding 'biker' to my Lord's list of passions. pic.twitter.com/jvISYDgo2m

In the wildfire of reactions, some objected to the fact that the Chief Justice was not wearing a mask or a helmet. Some even said the bike belonged to a politician's son.

Chief Justice of India (CJI) SA Bobde .
The guardian of law or a law breaker ? No Mask , No helmet #COVIDIOTS#Covid_19pic.twitter.com/ZdOAlgywYD

Sources close to the Chief Justice told NDTV that the bike was brought to him by a Harley Davidson dealer for a demo and Justice Bobde "only sat on it" for a feel. The sources also said he was wearing a mask but removed it and kept it in his pocket while sitting on the bike.

Justice Bobde did not know who owned the bike, the sources stressed.

In November 2019, when he was taking over as the country's top judge, Justice Bobde had in multiple interviews confessed his passion for bikes. He reportedly had an accident while testing a muscle bike, which kept him away from courts for a few days.

The Chief Justice, who was part of important judgments including the Ayodhya temple-mosque case, has been presiding over hearings via video link during the coronavirus lockdown.

Recently, he said judges must avoid their standard black coats and gowns during the pandemic and switch to plan white shirts with a neck band.

In his latest case, Justice Bobde said about the Lord Jagannath Rath Yatra that the event would not be allowed this year because of coronavirus precautions. "Lord Jagannath will not forgive us if we allowed the rath yatra," he said.

Later, following requests for review, the Supreme Court allowed the Rath Yatra with curfew and restrictions.