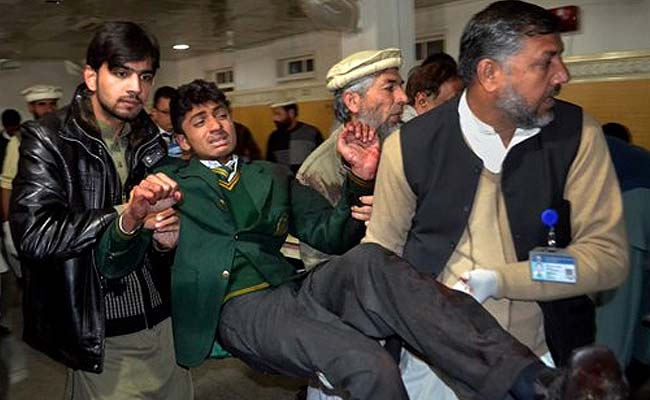 Volunteers carry a student injured in the shootout at a school under attack by Taliban gunmen, at a local hospital in Peshawar. (Associated Press photo)

New Delhi: Prime Minister Narendra Modi today spoke to his Pakistani counterpart Nawaz Sharif and expressed deep condolences over the brutal killing of more than 140 people, most of them children, in one of the bloodiest terror attacks at a Peshawar school today. (Taliban Attack in Pakistan: Follow Our Live Coverage)

PM Modi also offered to provide all assistance to Pakistan "during this hour of grief."

India stands firmly with Pakistan in fight against terror. Told PM Sharif we are ready to provide all assistance during this hour of grief.

The PM has also appealed to schools across India to observe two minutes of silence tomorrow as a mark of solidarity.

Mr Sharif has gone to Peshawar. "I can't stay back in Islamabad. This is a national tragedy unleashed by savages. These were my kids," he said in a statement.

PM Modi condemned the attack and said in a statement, "It is a senseless act of unspeakable brutality that has claimed lives of the most innocent of human beings - young children in their school. My heart goes out to everyone who lost their loved ones today. We share their pain and offer our deepest condolences." ("Unspeakable Brutality": PM Modi on Pakistan School Attack)

Amid tension after cross-border violence in Kashmir peaked recently to the worst in over a decade, the two leaders shared cold vibes at a meeting of leaders of South Asian Association for Regional Cooperation or SAARC late last month.

Through the two-day summit, the leaders had cold-shouldered each other, barely exchanging pleasantries at a dinner. When Mr Sharif had got up to address the summit, Mr Modi was seen pointedly reading a pamphlet.

A slight thaw seemed to come as the summit wound up at a mountain retreat where the two leaders shook hands. At a photo-op, PM Modi was seen smiling and chatting with Mr Sharif and at one point placed his hand on Mr Sharif's arm.

But India also cautioned against reading too much into such "courtesies," asserting that it is "for peaceful ties with Pakistan" but wants "meaningful dialogue."

Promoted
Listen to the latest songs, only on JioSaavn.com
PM Modi had invited Mr Sharif for his oath ceremony in May this year along with other SAARC leaders and the two leaders had talked of restarting dialogue after months of frozen ties.