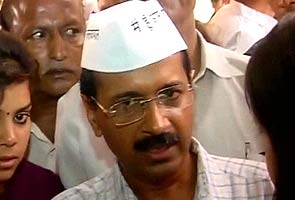 New Delhi: While launching his political party in Delhi today, activist Arvind Kejriwal outlined some tenets selected, he said, from 20,000 suggestions received from the public. His party, to be christened on November 26, will not allow elected representatives to use government accommodation, security, or the lal batti or red beacons that guarantee right of way for vehicles used by  MPs.  The vision statement was far from pragmatic: It promised, for example, that prices of essential commodities should not be changed without the people's consent.

Mr Kejriwal's  decision to enter politics led to a parting of ways with his mentor, Anna Hazare.

Many among the supporters - 500 at first, and 1200 in a few hours- who gathered with Mr Kejriwal this morning asked if Anna would be joining them for the launch of the new outfit. He won't. The 75-year-old has made it clear that in his opinion, entering politics will dilute the movement against graft that was led by Mr Kejriwal and him with considerable success.

There were traces of Anna's influence everywhere. Mr Kejriwal wore the cap or "Anna topi" that became iconic during the hunger strikes that Anna led over the last two years, demanding the creation of the Lokpal or national ombudsman empowered to investigate venal bureaucrats and politicians. The caps then used to read "Main hoon Anna" (I am Anna). The one used by Mr Kejriwal today said "Main aam admi hoon" (I am the common man).

After days of derisive remarks, Anna softened after a meeting in Delhi yesterday with Mr Kejriwal, who said he had sought the blessings of the Gandhian. "If good people enter politics, they can make a difference," said Anna, a marked change from his recent declaration that "politics is full of filth." He also said that if Mr Kejriwal stands for election, he will support him, but caveated that not all candidates put up by Mr Kejriwal will be backed by him. His protege; is convinced that will change. "I am sure that if we find good candidates, Anna will support us," he said.

Mr Kejriwal's decision to launch what he describes as "a political alternative" was announced in August, when the India Against Corruption movement that Anna and he had headlined appeared to be dissipating in public. Mr Kejriwal was at the time on a six-day fast in Delhi. The crowds at his base camp were thin. The government ignored him, refusing to urge him to eat, or to talk about when the Lokpal bill - named for the new anti-graft body it births - would be cleared as law. It has passed in the Lok Sabha, but has been stalled in the Rajya Sabha.

Promoted
Listen to the latest songs, only on JioSaavn.com
As Mr Kejriwal said he would form a political party, Anna said he would lend his support, but would not join the party or contest elections. He later said that the pressure to raise funds, to find honest candidates who would remain uncorrupted by power if they were elected would be too great for the activists to bear without compromise.