The BJP leader also dismissed "rumours" about the death of a few people in a firing incident in the state, for which the special status granted under Article 370 of the Constitution has been scrapped. 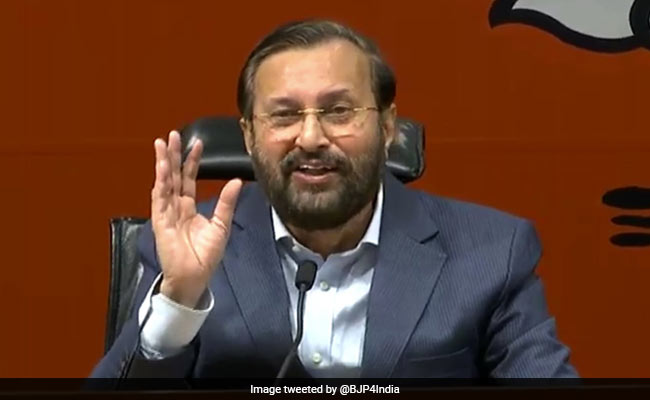 Stating that curfews and restrictions have been lifted from many places in Jammu and Kashmir since abrogation of the special status, Union minister Prakash Javadekar said the festival of Eid al-Adha was celebrated with "great enthusiasm" in the border state.

The BJP leader also dismissed "rumours" about the death of a few people in a firing incident in the state, for which the special status granted under Article 370 of the Constitution has been scrapped.

The Information and Broadcasting Minister said peace has been restored in Jammu and Kashmir as "restrictions and curfews were lifted from most parts" of the border state which has now been given the status of a Union Territory.

"Peace is prevailing in Jammu and Kashmir and life is returning to normalcy there. People celebrated Eid al-Adha with great enthusiasm," Mr Javadekar said while addressing a press conference at the Indore BJP office.

The Parliament had recently passed a bill to bifurcate Jammu and Kashmir into two Union Territories.

"Rumours were spread about the death of some people in a firing incident in Jammu and Kashmir. But, such reports are absolutely false. The Union Ministry of Home Affairs and the Jammu and Kashmir administration have clarified that there was one or two small protests in the state. Life is normal and peaceful there and curfews and restrictions at almost all places have been lifted," he said.

On the Congress allegation that Kashmiris have been facing hardships due to imposition of restrictions by the Centre, the minister said: "The operation to eliminate the Pakistan-sponsored terrorism in J&K has been going on. There used to be round-the-year curfew under the rule of the Congress and the National Conference. For the time being, curfew was clamped in some places that too for a few days whereas the situation is normal at other places."

Mr Javadekar said Article 370 had provided Pakistan a weapon to carry out its separatist propaganda and to promote terrorism.

"We took this decision (to scrap provisions of Article 370) to give justice and basic rights to the common citizens of J&K. Our decision has also met moral and legal criteria," the senior BJP leader said.

Mr Javadekar claimed the residents of the Kashmir Valley are "welcoming" the Centre's move on Article 370, besides people from Jammu and Ladakh regions.