Venkaiah Naidu On PNB Fraud: "Issue Is Not This Regime Or That Regime"

"The issue is not this regime or that regime. The issue is of people losing confidence in the banking system. This is the larger issue. Who is accountable? What assurance they are giving to depositors. These are the larger issues that should be taken," Venkaiah Naidu said today. 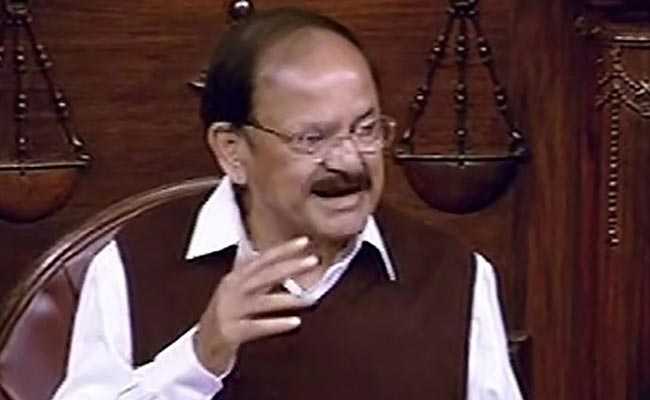 New Delhi: With opposition and government differing over contours of debate on the biggest bank fraud, Vice President M Venkaiah Naidu on Thursday said the parliament should function to debate on the larger issue of frauds, damage they cause to the country's image and doubts created over banking system. He also said there is no use in finding fault in whose regime the frauds took place.

The Lok Sabha and Rajya Sabha have witnessed repeated adjournments during the second half of the Budget session that began on March 5, with opposition parties stalling proceedings over issues, including Punjab National Bank (PNB) fraud.

The opposition wants a debate on the issue under rules that would require voting on a resolution, the government is pressing for a short duration discussion without any voting.

Speaking at realtors' body CREDAI annual conclave, Mr Naidu, who is also the presiding offer of Rajya Sabha, said he has agreed for a debate on the PNB fraud and other issues but "unfortunately" discussion is not happening.

Both houses of parliament were paralysed for the ninth consecutive day on Thursday with no business except for the legislations government pushed through in the din being transacted.

"People are questioning entire banking system. Is there a structural failure, is there a collusion of people at different levels. If it is so, then why no action is taken," Mr Naidu said.

"I hope that parliament function and then there is a meaningful and constructive debate on where does the fault lie," Mr Naidu said.

"The issue is not this regime or that regime. The issue is of people losing confidence in the banking system. This is the larger issue. Who is accountable? What assurance they are giving to depositors. These are the larger issues that should be taken," Mr Naidu said.

Mr Naidu cautioned CREDAI not to allow black sheep and have a self code of conduct to keep defaulters and violators out of its organisation.

Promoted
Listen to the latest songs, only on JioSaavn.com
The law alone will not help in dealing with this disease as there are legal ways to fight cases for years together, he said, adding that the best way is voluntary code of conduct and whoever violates the norms, such black sheep and fly by night operators should be kept at distance.

This will enhance CREDAI's credibility and acceptability, Mr Naidu said. "This is the need of hour in real estate sector."