Parliament Monsoon Sessions Updates: The Opposition MPs have been protesting in the Parliament over the alleged Pegasus scandal, farm laws and other issues.

Monsoons Session 2021 Updates: The Houses were adjourned on Wednesday amid protests. (File)

The proceeding of both the houses of Parliament -- Rajya Sabha and Lok Sabha -- were adjourned till 11 am, tomorrow amid protests by Opposition leaders over various issues. The Opposition members have been protesting in the Parliament over the alleged Pegasus scandal, farm laws and other issues, due to which both the Houses have adjourned multiple times over the last few days.

On Wednesday, the Lok Sabha passed the Insolvency and Bankruptcy Code (Amendment) Bill by a voice vote while the Juvenile Justice (Care and Protection of Children) Amendment Bill was passed in the Rajya Sabha. Subsequently, both the Houses were adjourned till 11 am on Thursday.

The meeting was held amid continuing protests by Congress and other opposition parties in both Houses over their demands including the probe into allegations of surveillance through Pegasus software and the repeal of three new farm laws.

The government has pushed some bills amid opposition protests.

Leaders from Bahujan Samaj Party (BSP) and Shiromani Akali Dal (SAD) also demonstrated against the farm laws and demanded that the Centre must discuss farmer's issues properly inside the Parliament and these "black laws" should be repealed.

The Opposition MPs continued to protest over the Pegasus issue in Lok Sabha during Zero Hour, after which the lower house was adjourned till 2 pm while in Rajya Sabha MPs gathered around the well of the House and protested over various issues.

Earlier over the repeated incidents of adjournment Lok Sabha Speaker Om Birla had warned to take action against those members in order to maintain the decorum of the House.

Jul 29, 2021 13:07 (IST)
Parliament Live Updates: Lok Sabha Proceedings Adjourned For Third Time
Lok Sabha proceedings were adjourned for the third time on Thursday till 2 pm as opposition members continued their protest over Pegasus and other issues.

When the House met at 12:30 pm, Rajendra Agrawal, who was chairing the proceedings, took up papers to be laid by ministers.

As protests continued, he adjourned the House till 2 pm.

We highlighted that in our approach to global issues we're guided by quest for perfect union but we seek to right historical wrongs.When it comes to freedom,we shouldn't treat it as non-governance or abdication of responsibilities. Our conversation on this should be balanced: EAM

Jul 29, 2021 12:28 (IST)
Parliament Live Updates: Lok Sabha Adjourned For Second Time Till 12:30 PM
Lok Sabha proceedings were adjourned for the second time on Thursday till 12:30 pm as opposition members continued their protest over Pegasus and other issues, reported PTI. After the Question Hour ended at 12 noon, Rajendra Agrawal, who was in the Chair, asked the protesting members to return to their respective seats. "We are starting Zero Hour, please go back to your seats," he appealed to the members. Soon after, he adjourned the House till 12:30 pm. When the House met in the morning, Speaker Om Birla had expressed displeasure over unruly the behaviour by some opposition MPs on Wednesday.
Jul 29, 2021 11:56 (IST)

Jul 29, 2021 11:54 (IST)
"Requested Them Personally": Minister Pralhad Joshi On Opposition's Pegasus Protest
Parliamentary Affairs Minister Pralhad Joshi has slammed Congress MP Rahul Gandhi and called the Pegasus a "non issue", according to news agency ANI. "A non-issue is unnecessarily being made an issue. Can thousands of people across the world be spied upon? What Rahul Gandhi says, he doesn't understand. That is his basic problem. He speaks most immaturely," Mr Joshi was quoted as saying.
"The government, Speaker and the Chairman are requesting. We requested them personally. Despite that, they're not allowing the House to function. It's not right if they say that we don't want the House to run. COVID was discussed in Rajya Sabha but they didn't discuss it in Lok Sabha. This is most unfortunate," he said.
Jul 29, 2021 11:46 (IST)

Some members of the House are repeating incidents that are against Parliament rules; If this continues, I'll have to taken an action against those members in order to maintain the decorum of the House, said Lok Sabha Speaker Om Birla before adjourning the House pic.twitter.com/rQVVF9G1xl

Jul 29, 2021 11:19 (IST)
Lok Sabha Adjourned Till 11:30 AM, Rajya Sabha Adjourned Till 12 PM
Rajya Sabha has been adjourned till 12 noon amid protest by Opposition MPs soon after the session began for the day, while Lok Sabha has been adjourned till 11:30 am, according to news agency PTI. Lok Sabha Speaker Om Birla has voiced his displeasure over the unruly behaviour by some opposition MPs on Wednesday.
Jul 29, 2021 11:17 (IST) 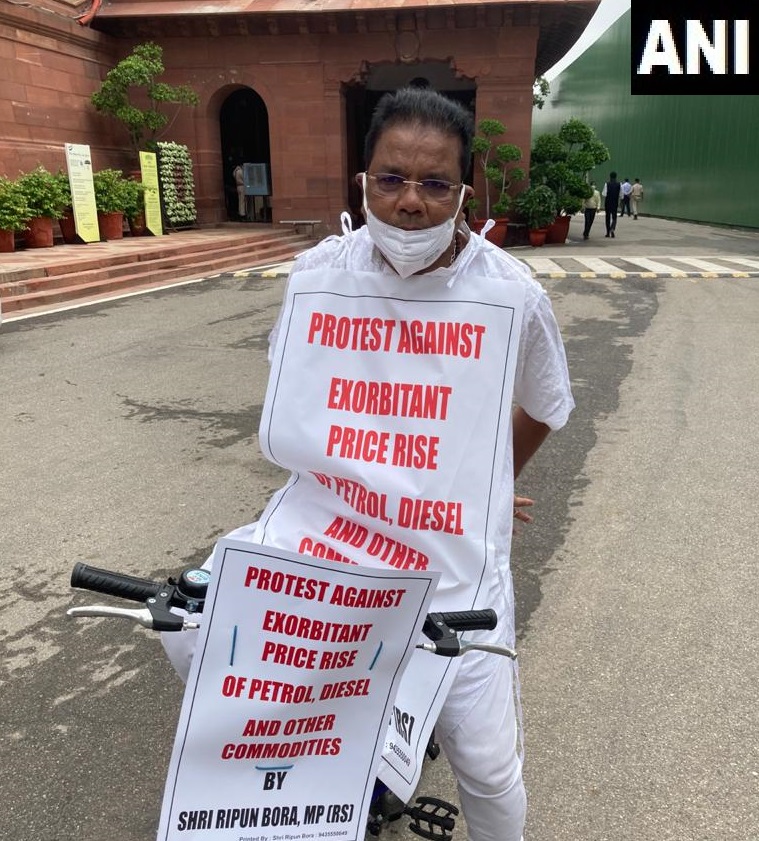 Delhi | Congress MPs hold protest at the Parliament in support of farmers#MonsoonSession2021pic.twitter.com/VoX208FBgt

Jul 29, 2021 10:17 (IST)
If They Allow Discussion On Pegasus, House Will Function Properly: Mallikarjun Kharge
Congress leader and Rajya Sabha MP Mallikarjun Kharge said: "We only want discussion on Pegasus issue. For that, PM Modi and Home Minister's presence is necessary. This (snooping) is treason. If they let us discuss the issue, the House will function properly. We've also called an all-party meet today," according to news agency ANI. 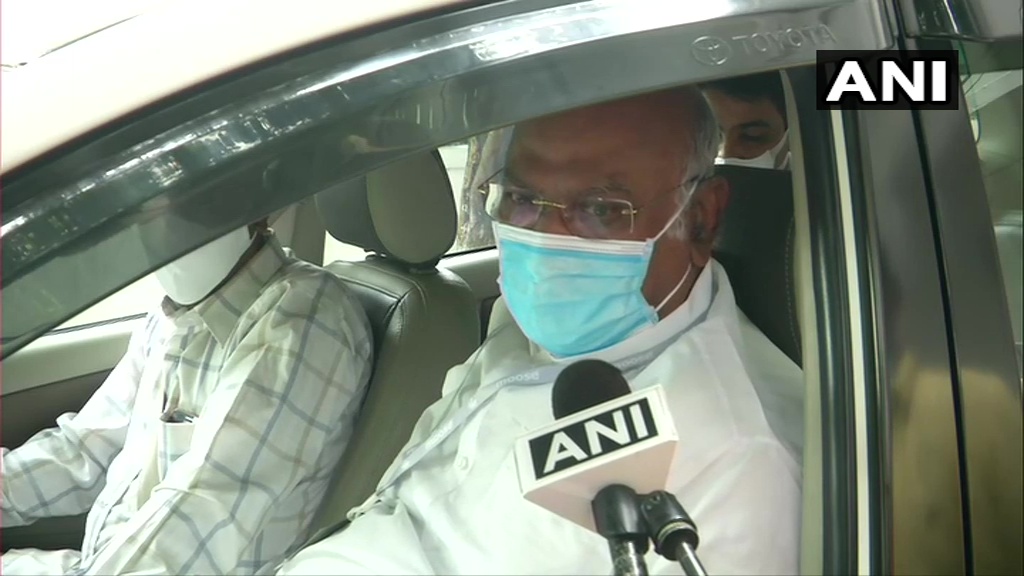 Jul 29, 2021 09:51 (IST)
Congress MP Manish Tewari Gives Notice In Lok Sabha For Discussion On Pegasus
Congress's Lok Sabha MP Manish Tewari has also given adjournment motion notice demanding discussion on the 'Pegasus project' issue, according to news agency ANI.
Jul 29, 2021 09:39 (IST)
Parliament LIVE Updates: Congress MP's Lok Sabha Notice For Discussion On Pegasus
Congress MP Manickam Tagore has given adjournment motion notice in Lok Sabha for a discussion on the Pegasus issue in the presence of the Prime Minister or Home Minister, according to news agency ANI. His notice reads: "I hereby give notice of my intention to ask for leave to move a motion for the adjournment of the business of the house for the purpose of discussing a definite matter of urgent importance, namely:- Need to suspend the business of the day to have a discussion in the presence of the Prime Minister or Home Minister on the Pegasus snooping, spying and surveillance scandal that has undermined democracy in India and to have a Supreme Court-monitored enquiry announced immediately."