Both houses saw repeated adjournments with 19 AIADMK and TDP lawmakers being suspended from the Lok Sabha for 4 days.

The Rafale debate continued in the Parliament after a heated debate yesterday between the Opposition and the ruling party. Rahul Gandhi, Congress chief and leader of the Opposition, took shots at Prime Minister Narendra Modi and challenged him for an one-on-one on the Rafale deal. "The PM has no guts to come to the Parliament and give answers on Rafale," the Congress president said, adding that Defence Minister Nirmala Sitharaman was "hiding" behind AIADMK members in the house. The Rajya Sabha will take up the triple talaq bill today for consideration and passing.

Both houses saw repeated adjournments with 19 AIADMK and TDP lawmakers being suspended from the Lok Sabha for 4 days. Lok Sabha was then adjourned for the day.

Here are the Highlights of the Parliament proceedings:

Jan 03, 2019 16:49 (IST)
Chairman M. Venkaiah Naidu, appealed to the members to "see to it that the House functions" as very few working days are left in the session.
He regretted that in the last 13 working days, the Upper House failed to transact any business, and added that when it came to asking for holidays there 'seemed to be a consensus' but when it came to the working of the House there "seems to be some reservations in some people's minds".
Jan 03, 2019 16:39 (IST)
The Rajya Sabha functioned smoothly and completed the zero and question hours for the first time in this Winter Session of Parliament.
Jan 03, 2019 14:50 (IST)
Arun Jaitley speaks in the Rajya Sabha about the Kashmir issue. He attacked the Congress, PDP and National Conference on the issue.

"Congress's mistakes hurting Kashmir. It created barriers in the state's growth." he said. 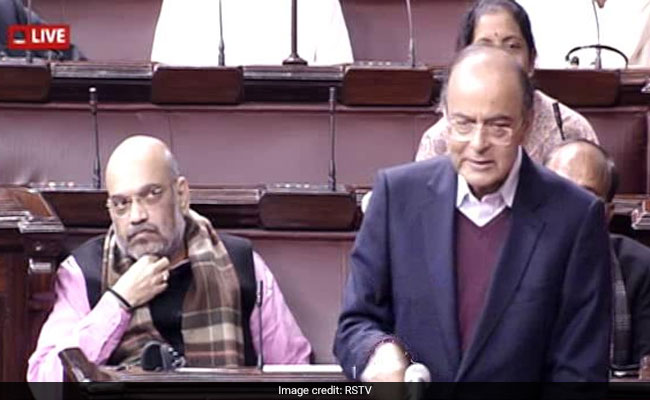 Soon after Chairman M Venkaiah Naidu expressed anguish at proceedings of the House being repeatedly adjourned because of disruptions, A Navaneethakrishnan from AIADMK raised the issue of the party's 24 members in Lok Sabha being barred from attending the lower house for five days.

The AIADMK members, he said, are unable to participate in Lok Sabha proceedings.

"This is undemocratic," he said as Mr Naidu ruled that conduct in Lok Sabha cannot be discussed in the Upper House.

Demanding that the central government withdraw permission given for a detailed feasibility report (DFR) for Mekadatu dam project, he said people of Tamil Nadu are being adversely affected.

Referring to party MPs being suspended from Lok Sabha, he said, "Our people are suffering".

To this, Mr Naidu said, "People of the country are suffering" because of disruptions his party has caused in Rajya Sabha resulting in washout of proceedings on most days of current winter session of Parliament.

He said Water Resources Minister Nitin Gadkari came to the House on Wednesday to give a statement on the issue but could not do so due to disruptions by the party members.

The Chairman did not allow Mr Navaneethakrishnan to raise the issue any further, following which the AIADMK members walked out of the House.


Bill for consideration and return

Jan 03, 2019 12:27 (IST)
To Rahul Gandhi's jibe yesterday on his 4 questions, Nirmala Sitharaman said, "A student who fails in the classroom boasts and challenges from outside." She is to speak on the Rafale deal today in the Lok Sabha.
Jan 03, 2019 12:17 (IST)
Rahul Gandhi tweeted a jibe at PM Modi saying he has "fled the Parliament."

So it seems our PM has fled Parliament & his own open book Rafale exam & is instead lecturing students at Lovely Univ. in Punjab, today.

I request the students there to, respectfully, ask him to please answer the 4 questions posed to him by me, yesterday. #RafaleScam

Jan 03, 2019 10:56 (IST)
The Triple Talaq bill was passed by the Lok Sabha last week. The government considered a law on it after the Supreme Court said in August last year that the traditional method of Muslim men instantly divorcing their wives by uttering Talaq thrice was "unconstitutional" and "arbitrary".
Rafale debateParliament liveWinter Session of Parliament